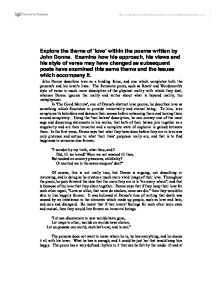 Explore the theme of 'love' within the poems written by John Donne. Examine how his approach, his views and his style of verse may have changed as subsequent poets have examined this same theme and the issues which accompany it.

Explore the theme of 'love' within the poems written by John Donne. Examine how his approach, his views and his style of verse may have changed as subsequent poets have examined this same theme and the issues which accompany it. John Donne describes love as a binding force, and one which completes both the persona's and his lover's lives. The Romantic poets, such as Keats' and Wordsworth's style of verse is much more descriptive of the physical reality with which they deal, whereas Donne ignores the reality and writes about what is beyond reality; the metaphysical. In 'The Good Morrow', one of Donne's abstract love poems, he describes love as something which flourishes to provide immortality and eternal being. To him, love enraptures its beholders and devours their senses before enhancing them and turning them around completely. Using the 'two halves' description, he can convey one of the most sage and discerning statements in his works; that both of their halves join together as a singularity and are then immortal and a complete state of euphoria is gained between them. In the first verse, Donne says that what they have done before they are in love was only pretence and untrue to what their lives' purposes really are, and that is to find happiness in someone else forever. "I wonder by my troth, what thou, and I Did, till we loved? ...read more.

Donne envies the flea for its audacity to just jump up and suck the blood of the woman he is trying to seduce, and he is clear about this: "In what could this flea guilty be, Except in that drop which it sucked from thee?" In verse one, Donne starts his argument with the fact that what she is denying him is so little, and whilst the flea has just bitten them both and mixed their blood to form a bond, quite discreetly and effortlessly, he has to painstakingly pull down her defences, and that he is becoming distraught about it. He says what they would do is not a sin at all: "Confess it, this cannot be said A sin, or shame, or loss of maidenhead," Then, in verse two, he uses the flea to his advantage against her. He envies the flea for what he himself cannot seem to do, and he boldly uses it as a third party, a vector, for their marital bonding. Donne says that because their two bloods are mingled in the flea, they are as good as married. "Oh stay, three lives in one flea spare, Where we almost, nay more than married are." He considers the flea to be their "marriage temple" and he knows this might be the only way to get away with it, as their parents are not at ease with each other. ...read more.

A style common to Donne's poems and the two modern poems is that they use common objects that normally wouldn't be given a second thought and turn them into a metaphorical object for love, such as the flea in 'The Flea' and the onion in 'Valentine'. But still, Donne insists on discarding the description of the object and linking it to abstract meanings, and concentrates on discussing the object's immediate and distant metaphysical implications. In a sense, it seems as though Donne was one of the last of a dying line of poets. Since the Romantic Period in poetry, the shift in approach there has echoed through the nineteenth century to influence how modern poets write. Romantic and Modern poetry is about linking physical objects such as gardens, eggs, onions, boxes and trees to metaphorical meanings, whereas Donne took his feelings and wrote them down, providing argument and scope for it too. Donne's style is much more persuasive than some of the more recent poems, and the poets who largely brought about this change were undoubtedly the Romantic poets, such as Wordsworth, who expressed that the language used by the poets of his day (admittedly not specifically John Donne - he had died more than one hundred years before) was literary and dead. By expressing and thus acting upon this, he brought upon a paradigm shift in the approach to themes such as love in poetry, and he effectively started the Romantic Period himself, which brought much more descriptive poems than argumentative ones. ...read more.