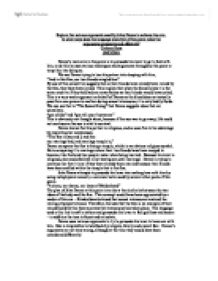 Explore the various arguments used by John Donne to achieve his aim. In what ways does the language and style of the poem make the arguments persuasive and effective?

Explore the various arguments used by John Donne to achieve his aim. In what ways does the language and style of the poem make the arguments persuasive and effective? Graham Ross 19/02/2004 Donne's main aim in the poem is to persuade his lover to go to bed with him, to do this he uses various techniques and arguments throughout the poem to tempt her into doing so. We see Donne trying to lure his partner into sleeping with him, "And in this flea, our two bloods mingled bee" By use of this conceit he suggests that as their bloods have already been mixed by the flea, they have been joined. ...read more.

"goe childe" and "goe tell court-huntsmen" This is obviously not thought about, because if the sun was to go away, life could not continue as the sun is vital to survival. Donne knows that his partner is religious, and so uses this to his advantage by exploiting her weaknesses. "This flea is you and I, and this our marriage bed, and marriage temple is;" Donne compares the flea to being a temple, which is an obvious religious symbol. He is comparing it to marriage where their two bloods have been merged to become, like the bond two people make when being married. ...read more.

This concept would have been appreciated by a reader of this era - Elizabethans believed that sexual intercourse involved the mixing of people's blood. Therefore, the idea that the flea is an example of their mixed blood by this theory proves that intercourse has taken place. The language used n this line is soft in nature and persuades his lover to feel guiltless and secure - in addition the tone is fluent and articulate. Donne uses various arguments to try to persuade his lover to have sex with him. She is tempted but is held back by religion, family and overall fear. Donne's arguments are not very strong, although at the time they would have been considered differently. ...read more.