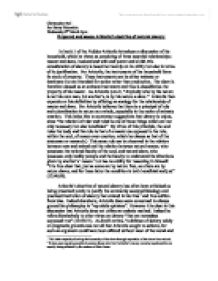 Expound and assess Aristotle's doctrine of natural slavery In book 1 of the Politics Aristotle introduces a discussion of the household, which he views as consisting of three essential relationships: master and slave, husband and wife and parent and child. His consideration of slavery is based not merely on its utility but also in terms of its justification. For Aristotle, the instruments of the household form its stock of property. These instruments can be either animate or inanimate but are intended for action rather than production. The slave is therefore classed as an animate instrument and thus is classified as the property of his master. As Aristotle puts it, "Anybody who by his nature is not his own man, but another's, is by his nature a slave." Aristotle then expands on this definition by offering an analogy for the relationship of master and slave. For Aristotle believes that there is a principal of rule and subordination in nature as a whole, especially in the realm of animate creation. This helps him to counteract suggestions that slavery is unjust, since "the relation of ruler and ruled is one of those things which are not only necessary but also beneficial." ...read more.

however this contradicts the idea that the slave is by nature a slave and thus to free them from the state to which nature has placed them would be wrong. However Aristotle can defend himself here, since the master is not required to feel any moral responsibility to the slave. Since the nature of the despotic rule of master to slave is characterised as being solely in the interests of the master, with any benefit that the slave receives being accidental (1278b32-7). Indeed presumably any friendship that might exist between master and slave could be characterised as one of utility, with the master benefiting from the slave's service in exchange for the slave gaining from having a master. However the suggestion that a master might utilise a steward to employ the slaves (1255b35) is more troubling, since the steward would himself be a slave. How therefore would he be a fit master, since presumably he would not have the capacity of reason that allows a master to know how to use slaves. While it might be argued that the steward could first take his orders from the master and thus not be exercising reason but merely recognising it, his position does still seem troubling. ...read more.