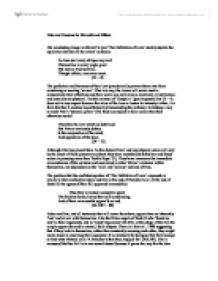 Fate and freedom in Marvell and Milton.

Fate and freedom in Marvell and Milton The concluding image in Marvell's lyric 'The Definition of Love' starkly depicts the separation intrinsic to the lovers' existence: As lines (so loves) oblique may well Themselves in every angle greet: But ours so truly parallel, Though infinite, can never meet. (25 - 8) The perfection and harmony of their love paradoxically prevent them ever from combining or meeting 'as one'. That is to say, the lovers will never meet to consummate their affections and their union can only remain emotional or intellectual, and certainly not physical. Yet this mixture of 'Despair / Upon Impossibility' (3 - 4) does not in any respect demean the value of the love or lessen its intensity: rather, it is from this that it reaches its perfection by transcending the ordinary. In finding a way to resist Fate's 'tyrannic power' (16) they accomplish a fuller union than they otherwise would: Therefore the love which us doth bind But Fate so enviously debars, Is the conjunction of the mind, And opposition of the stars. (29 - 32) Although Fate has placed them 'as the distant Poles' and any physical union will only be the result of freak planetary accident, they have nonetheless defied her and found solace in pursuing more than 'feeble Hope' (7). ...read more.

The poem shows the conclusion of man being master of his own fate, yet unlike the contended reassurance found for the two lovers in 'The Definition', who by a complex astronomical and intellectual leap find that their separation is an aspect of the perfection of their love, here the human assumption of quasi-divine authority is more unsettling. Moral judgement is worthless against Cromwell, who in his virtual omnipotence makes this redundant: 'Tis madness to resist or blame The force of angry heaven's flame (25 - 6) Throughout, Marvell famously refuses to praise Cromwell unequivocally, or to castigate the dead king, instead presenting an ambivalent response to the final events of the Civil War. Although it is a poem with a clear focus on the leaders and events which were forming England, it is much more personal than, for example, 'The First Anniversary', which has a clear sense of its position as 'public' literature. Given this, it might perhaps seem strange that the Horatian Ode presents a world where retreating into the self appears virtually impossible. Nature, the supreme goddess in the final fragmentary cantos of the Faerie Queene and a frequent force of authority in much Renaissance literature, has lost her power ...read more.

There is a kind of delighted lethargy as the speaker immerses himself in an abundant, Edenic profusion of food, apparently retreating so far into a prelapsarian state that he loses control, 'stumbling on melons'. Yet even here knowledge is derived from an experience of loss. Ridding himself of 'busy companies of men', he loses his social lifestyle and learns instead the value of 'delicious solitude'. Intellectually, he discovers the destructive powers of the mind: Annihilating all that's made To a green thought in a green shade. (47 - 8) Jonathan Crewe argued that 'in the wake of political monarchy the only masculine absolutism may well be the displaced, solitary absolutism of the imaginary garden state' (57). This theory does not take into account the extent to which a return to Eden constitutes a further subjection of one's own power from that experienced on earth; it equally ignores the loss of knowledge that such a return necessarily requires. Postlapsarian Adam and Eve have a new freedom to experience life for themselves, to conduct themselves with far greater liberty than that afforded them in Paradise. Although of course life will not be without its rules of worship and behaviour, Providence is now their guide rather than their master. ...read more.