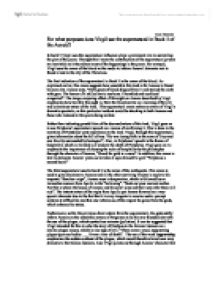 For what purposes does Virgil use the supernatural in Book 3 of the Aeneid?

Tosin Abdullai For what purposes does Virgil use the supernatural in Book 3 of the Aeneid? In book 3 Virgil uses the supernatural influence plays a prominent role in unraveling the plot of the poem. Through this I mean the contributions of the supernatural powers are inevitable as it they direct most of the happenings in the poem. For example, Virgil uses the omen of the blood as the media to inform Aeneas' character not to found a land in the city of the Thracians. The first indication of the supernatural in Book 3 is the omen of the blood. As explained earlier, this omen suggests how unsuitable this land is for Aeneas to found his new city. Aeneas says, "Dark gouts of blood dripped from it and stained the earth with gore. The horror of it chilled me to my bone. I trembled and my blood congealed". The image-conjuring effect of this sight on Aeneas described by Virgil emphasizes how horrible this sight is. Here the blood serves as a warning of the evil and calamitous nature of the land. This supernatural omen makes us aware of Virgil's dramatic spectacle, as this particular incident would be shocking to both Aeneas and those who listened to this poem being recited. ...read more.

"There came a cruel, suppurating plague upon our bodies ..... It was a time of death". The use of the word suppurating emphasizes the sudden outburst of the plague, which would therefore have been very dramatic to the Roman listeners. Also Virgil points out through Aeneas' character that it is "his father" who "bade his retrace of his course back to across the sea to Phoebus Apollo", which presents Aeneas' slow-wittedness as he is unable to read into the oracles subtle omens. Another way Virgil uses the supernatural is as a means of comforting Aeneas in his time of sorrow. Here, the Penates (the gods of the household) does this by reminding him of his kindness to them in the past and they also revealing to him that he is destined to "build great walls" for the surviving Trojans, so should therefore "rise with a cheerful heart". The Penates also provide very direct orders for Aeneas to follow, as he and his father had misinterpreted the previous revelation from Apollo. This re-emphasizes to us, Aeneas limited intellect as once again, he has to be told what so do specifically, compared to all other legends of myth such as Odysseus, who was known for his quick- wittedness and his "way with words". ...read more.

His prayers are immediately answered by the gods as a "breeze freshened and a harbour opened before us". Virgil here uses this supernatural as a solution to their difficulty and a form of reassurance as it signifies that the "gods are still in their favour". It also enhances the status of Anchises as it presents his character as respectable in the eyes of the gods. Finally, Virgil is able to use the super natural as a means of reflecting on the legends of the past. Through the supernatural character of Polyphemus, the Cyclopes, Virgil is able to reflect on the story of Ulixes and his encounter, as he is now blind. This thereby serves as comparism to Aeneas skills as a hero and leader in the mind of the listeners. The description of the Cyclopes presents him as a very sympathetic as he is great pain, therby presenting Ulixes as mean and heartless. "He washed away with sea water the blood that was still trickling from his gouged-out eye, grinding his teeth in pain". In conclusion, I personally think that the contribution of the supernatural to Aeneas' achievement in this book is inevitable as without them he would not have been able to have carried out any of his duties. However the dramatic spectacle and shocking nature of these supernatural are able to portray Virgil's skills as a very good writer. ...read more.