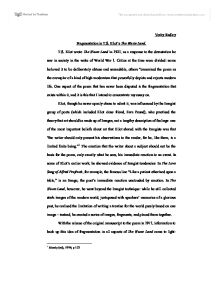 Verity Radley Fragmentation in T.S. Eliot's The Waste Land. T.S. Eliot wrote The Waste Land in 1921, as a response to the devastation he saw in society in the wake of World War 1. Critics at the time were divided: some believed it to be deliberately obtuse and unreadable, others "canonized the poem as the exemplar of a kind of high modernism that powerfully depicts and rejects modern life. One aspect of the poem that has never been disputed is the fragmentation that exists within it, and it is this that I intend to concentrate my essay on. Eliot, though he never openly chose to admit it, was influenced by the Imagist group of poets (which included Eliot close friend, Ezra Pound), who practised the theory that art should be made up of Images, not a lengthy description of feelings: one of the most important beliefs about art that Eliot shared with the Imagists was that "the writer should only present his observations to the reader, for he, like them, is a limited finite being."1 The emotion that the writer about a subject should not be the basis for the poem, only exactly what he sees, his immediate reaction to an event. In some of Eliot's earlier work, he showed evidence of Imagist tendencies: In The Love Song of Alfred Prufrock, for example, the famous line "Like a patient etherized upon a table," is an Image; the poet's immediate reaction unclouded by emotion. ...read more.

Just as the one-eyed merchant, seller of currants, melts into the Phoenician Sailor, and the latter is not wholly distinct from Ferdinand Prince of Naples, so all women are one woman, and the two sexes meet in Tiresias. What Tiresias sees, in fact, is the substance of the whole poem."4 This suggestion is also highlighted in the text: "And I Tiresias have foresuffered all" (line 243), as if to suggest that he becomes almost omnipotent in the poem, seeing everything and experiencing everything that the different speakers experience, incorporating all aspects of their personalities into himself. The fragmentation in the poem extends to the poetic form of the poem. Whereas in some of Eliot's earlier poetry he experimented with rigid structure, in The Waste Land he appears to have returned to his beloved free verse. However, on closer examination it is clear that within this free verse Eliot employs short bursts of structure, partly as a homily to the poetic works of the past. In part 2, 'A Game of Chess', for example, the first half of the section depicting the upper class woman surrounded by wealth is written mainly in unrhymed iambic pentameter, growing more and more irregular to match the woman's increasingly disturbed thoughts. This contrasts directly with the structure in the second part of the section, which is purely a dialogue interrupted at intervals by the barman's "HURRY UP PLEASE IT'S TIME". In part 3, 'The Fire Sermon', he juxtaposes his usual mixture of line length and erratic rhyme scheme with his inclusion of sections of ...read more.

They are designed to aid the reader's understanding of the poem, perhaps altering the meaning slightly in the process. Indeed, I cannot see how they can be viewed as theft, as quite often they are so hidden and well incorporated within the text of the poem, in fact they "do not seem to reinforce an otherwise approachable meaning but instead seem essential to the structure, not immediately perceivable, of the poem."6 For all literary allusions to be viewed as 'theft', would in fact, render most literature obsolete, as much of what makes up the literary Canon 'borrows' elements from other sources - Milton's Paradise Lost, for example. All The Waste Land serves to do is emphasize the borrowing culture of literature, hinting "that literature is nothing but a plague of echoes: that writing necessarily deserts its author, spreading like an epidemic into other texts."7 The myths that Eliot draws on form part of a group of recurring themes and images within the poem, the most prominent of which is that of Philomel, which appears in Ovid's Metamorphoses: Tereus, the King, rapes Philomel, his sister in law, before cutting out her tongue to stop her from telling anyone what has happened. However, she weaves the story of her plight into a tapestry to tell her sister, Procne, what has happened. The sisters then gain revenge on Tereus, by killing his son and feeding him to Tereus. They are then both transformed into birds - Philomel a nightingale, Procne a swallow - representing their escape from the harsh world around them. ...read more.