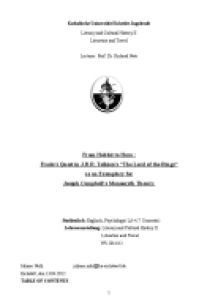 From Hobbit to Hero- Frodo's Quest as an Examplary Monomyth

ï»¿Katholische Universität Eichstätt-Ingolstadt Literary and Cultural History II Literature and Travel Lecturer: Prof. Dr. Richard Nate From Hobbit to Hero : Frodo's Quest in J.R.R. Tolkien's "The Lord of the Rings" as an Exemplary for Joseph Campbell’s Monomyth Theory: Studienfach: Englisch, Psychologie LA+ (7. Semester) Lehrveranstaltung: Literary and Cultural History II: Literature and Travel WS 2011/12 Juliane Nohl: [email protected] Eichstätt, den 13.04.2012 TABLE OF CONTENTS 1. INTRODUCTION 2. JOSEPH CAMPBELL’S THEORY OF THE MONOMYTH 1. Definition of the term 'Monomyth' 2. Definition of the term 'Hero' 3. The Phases of the Hero’s Journey 1. FRODO’S HERO’S JOURNEY 1. Departure 1. The Call to Adventure 2. Refusal of the Call 3. Supernatural Aid 4. Crossing the First Threshold 5. The Belly of the Whale 1. Initiation 1. The Road of Trials 2. The Meeting with the Goddess 3. The Woman as the Temptress 4. Apotheosis 5. The Ultimate Boon 1. Return 1. Refusal of the Return 2. The Magic Flight/ Rescue from Without 3. The Crossing of the Return Threshold 4. Master of the Two Worlds 5. Freedom to Live 1. CONCLUSION 2. BIBLIOGRAPHY ________________ 1 INTRODUCTION Since its release in 1954/55 J.R.R. Tolkien’s monumental work "The Lord of the Rings" has not only fascinated young and old readers, but also had an impact on literary studies, as it became a subject for many articles, books and studies. The book tells the story of the final battle between good and evil in the fictional world of Middle Earth and of an unlikely hero: the Hobbit Frodo Baggins. With this epic novel, Tolkien has created what he called a "new myth for England"[1]. When he was a student of Classics, the English language and Literature, he was already fascinated with the pre-Christian mythology of northern Europe. In his works "The Hobbit", "The Silmarillion" and of course "The Lord of the Rings", he included many features from these myths as well as Christian elements, since he was also a devoted Catholic.[2] In so doing, he created a story that followed the basic plot of almost every heroic quest myth told by humans. ...read more.

The first time when Frodo and his company are trapped in the Barrow-downs, and nearly slain by a Barrow-Wight, however Frodo manages to call upon Tom Bombadil, who is able to expel the Wight from the barrow; the second time Frodo that Frodo literally transits into a sphere of rebirth is when he is stabbed by the Witch King of Angmar and is closer to death as ever before; the last time that Frodo is swallowed into the symbolical "womb" is when he is stung by the spider-creature Shelob. It is noticeable that all of this instances combine a part of Campbell's description. He nearly dies (by the sword of Angmar), appears to have died (by the poison of Shelob) and finds himself in some sort of a womb (an actual grave in Frodo's case). Campbell also emphasizes the transformational character of the Belly Of The Whale, we may also notice this on Frodo. Gandalf describes this faint change the following "He is not half through yet, and to what he will come in the end not even Elrond can foretell. Not to evil, I think. He may become like a glass filled with a clear light for eyes to see that can " (Tolkien, 2007: 291) and his behaviour towards the end of The Return Of The King shows also that the events that occurred to him during this stage have changed Frodo completely. 4.2 Initiation ?Aided by the advice, amulets, and secret agents of the supernatural helper?[6] the hero now moves into a dream landscape where he must survive the "Road of Trials" in order to achieve his goal. The hero further has to discover and face his opposites and must put aside his pride, virtue and life in order to submit the absolutely intolerable. ?Dragons have now to be slain and surprising barriers passed ? again, again, and again. Meanwhile there will be a multitude of preliminary victories, unobtainable ecstasies, and momentary glimpses of the wonderful land? (Campbell, 1966: 109). ...read more.

" (Tolkien, 2007: 1293) 4 CONCLUSION The analysis on Frodo seems to validate Campbell?s theory. The results of this study show that in Frodo?s 'Hero?s Journey' all the essential phases of Campbell's Monomyth theory with the most important elements can be found. In "The Lord of the Rings", Frodo follows the stages very much in the same order that Campbell has organised the stages in "The Hero with a Thousand Faces". This is significant, because Campbell?s theory did not exist by the time "The Lord of the Rings" had been published, and thus cannot have served as a blueprint for Tolkien's novel. However, it has to be mentioned that in some cases, Campbell's description has to be interpreted in a rather symbolic than a literal way. Although Frodo?s quest is different from most quests, as he is to destroy something instead of acquiring something, it does not have an effect on his journey as a hero. These findings are important, because they show that not only in mythology, but also in modern literature, the classic elements of a hero's quest do not change. What changes is the presentation of the hero. Frodo is a very atypical hero: Although, the final boon can be acquired (or rather destroyed), Frodo fails his quest, because it was not because of him, but rather by coincidence that Middle-Earth could have been saved. Tolkien describes very detailed how Frodo is psychologically effected by this failure. In Tolkien's book, we see, that even heroes may fail if the power they are set against is too strong, and that in the end it is destiny that we all depend on. As mentioned in the paper, Frodo is not the only hero, that "The Lord of the Rings" is concerned with. Male characters like Aragorn, Samwise, Gandalf or female characters like Eowyn also undergo their own quests and may also be considered as "heroes". It could be of interest to analyse their quests as well, in order to determine whether for them Campbell's theory fits as well, or if this is only true for the main character Frodo. ________________ 5. ...read more.