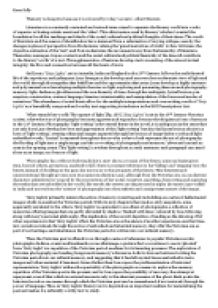 Gail Jones, Sixty Lights, set in Australia, India and England in the 19th Century, follows the multi-faceted life of the capricious Lucy Strange as she develops her modernistic view of light and the world,

﻿Kane Solly ?Memory is deceptive because it is coloured by today's events?- Albert Einstein Literature is a constantly contested and revised term coined to separate the literary world into works of superior or lasting artistic merit and the ?other?. This elitist nature used by literary ?scholars? created the foundation for all the teachings and ideals of the social, cultural and political thoughts of their times. The worth of literature and the means of classification have stemmed from a culmination of varying critique, seen by the changes in phase of perspective from Modernism; valuing the ?grand narratives of truth?; to New Criticism; the objective evaluation of the ?text?; and Post-modernism; the movement away from the hierarchy of literature. Thematics, messages, tropes, contexts and the social, cultural and political hierarchy of the time all contribute to the literary ?worth? of a text. This agglomeration of features develops texts consisting of the utmost textual integrity; the flow and connection between all the facets of texts. Gail Jones, ?Sixty Lights?, set in Australia, India and England in the 19th Century, follows the multi-faceted life of the capricious and palimpsest Lucy Strange as she develops and uncovers her modernistic view of light and the world, through the tragedies that befall her and the opportunities that arise. Jones develops a highly intricate and polysensual novel enveloping multiple theories on light, exploring and presenting ideas around photography, memory, light, darkness, ghostliness and the non-linearity of time, through her ambiguity, lyrical lexicon, pre-emption, construction, content, language, binaries, intertextuality and manipulation of the forms and modes of narratives. This abundance of noted facets allow for the multiple interpretations and over-arching worth of ?Sixty Lights? as a beautifully composed and worthy text supporting its inclusion in the HSC Prescriptions List. ...read more.

He believes ?it is ectoplasm ghosts are composed of? (Pg.92), and which Madame Esperance can summon. Barthes deploys the same language to describe photography. This word, ectoplasm, entwines the ghostly image and the photograph as images of an abnormal, or haunting presence. In Sixty Lights the desire to make dead voices speak transforms into the desire to cheat the obliterating action of time and death by creating permanent images, through words and writing, as defences against forgetting. Thus, one of the period?s important technological inventions, the photograph, is proclaimed as ?the future? but is, paradoxically, entangled to the past through its yearning for memory-made-permanent. Lucy is wholly anachronistic, she ?saw both the past and the future?, as ?Photographs cracked open time? (pg.235). This is synonymous with the construction of the novel, connecting chapters to following and preceding chapters; the opening ?Lucy? takes us to page 157 where her and Isaac share a bed and he calls her name, the development of Honoria and James, pre-Honoria?s death, are juxtaposed to the development of Lucy and Thomas, post-death, and the seeming misplaced images from her own novel, ?Special Things Seen?, all act as a metaphor and a medium for a past cyclic, both lost and, paradoxically, perpetuated, continuously repeated in the present. These ?ruptures? of time, are utilized by Jones to canvass the non-linearity of time ?the false liveliness of clocks?, and especially the affect grief and mourning have on the pleating of time. Archetypal of this ?multitemporal? construction of ?Sixty Lights? is Micheal Serres ?Conservations of Science, Culture and Time?, ?the handkerchief represents?concept of time which distance and proximity are stable and clearly define; but crumpled in the pocket the handkerchief evokes a ?topological? concept of time in which previously distant points ?become close or even superimposed?? Modernity, ...read more.

Thomas, on the other hand, follows the endemic form of grieving and ?burst into tears?[and] disappeared for a whole day.? These contrasting forms of grief swathe, which Jones values, the multiple ways in which ?bereavement settles?. This broader understanding and acceptance of life and death create a sense of consciousness within the novel, one, which speaks to the reader in ways of the personal and social, moulding this novel to that beyond the norm, making it of superior worth, a novel worthy of inclusion of the HSC Prescriptions List. Stand alone, each of these layers in the novel work as ultimately simplistic and used themes, although they do stand out as original in their representation. The success of ?Sixty Lights? as a worthy text does not simply come down to the quantity and quality of the themes, these are all in great quality and numerous quantities, but as many argue, for quantity, more is less, if the quality is superior. But one cannot simply say, the novel is not worthy of text due to the vast amounts of knowledge it holds, due to the fact that it is so intricately, delicately and sophistically interwoven and interconnected that it is of supreme worth, its punctum does not disturb the harmony of its studium, but give it the greatest level of exposure, falling together with the utmost textual integrity. ?Sixty Lights? is a modernist text, of a Victorian lady, from a post-modernist perspective. The only way such a feat, such a mesh of the three vastly differing literary forms, could only have been achieved by the textual integrity of Lucy, the conduit between the three. She is a woman, living in the present, viewing the past and future simultaneously through the lens of her perspective, motivated by the light beneath the lampshade (Lampshade: a hoop around an untellable story), a palimpsest unveiled. ...read more.