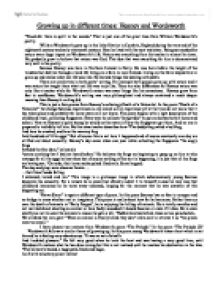 Growing up in different times: Heaney and Wordsworth.

Growing up in different times: Heaney and Wordsworth "Touch-for there is spirit in the woods." That is just one of the great lines from William Wordsworth's poetry. William Wordsworth grew up in the Lake District in Cumbria, England during the very end of the eighteenth century and early nineteenth century. Here he lived with his aunt and sister. Being surrounded by nature was a huge impact on Wordsworth's life. Nature was everything from his teacher to almost his lover. He gradually grew to believe that nature was God. This idea that was everything for him is demonstrated very well in his poetry. Seamus Heaney was born in Northern Ireland in Derry. He was born before the height of the troubles but did live through a hard life living on a farm in rural Ireland. Living on the farm helped him to grow up and realise what real life was like. He learned things like dealing with death. There are similarities in both poets' writing. For example both people grew up with nature and it was nature that taught them what real life was truly like. ...read more.

For a minute he is aware but afraid to admit it to himself in case he may lose that childhood innocence so he turns away sickened, longing for the moment that he was unaware of this disgusting act. "Dawn Shoot" is again a different type of poem. In this poem Seamus has no fear to conquer and no bridge to cross whether real or imaginary. This poem is really about how far he has come. Rather than cry over the death of animals in "Early Purges", he is enjoying the killing of animals. He is totally carefree and not worried about shooting an animal or how badly wounded it should become or even if it dies. He is even stealthy so not to scare the animals to ensure he gets a kill. "Rubber-booted, belted, tense as two parachutists, We climbed the iron gate." When an animal is finally killed they don't even care to retrieve it as "the prices were too small." I have chosen two extracts from Wordsworth poem "The Prelude." In the poem "The Prelude (I)" ...read more.

But Wordsworth being a Pantheist he cannot stay so he wonders off; "not seldom from the uproar I retired." Wordsworth here shows his poetic ability and understanding of nature because he realises that the hills are "melancholic." His subconscious understanding of nature forces him to go off and explore. What he realises is that everything around him is moving. "With visible motion her diurnal round! Behind me did they stretch in solemn train, Feebler and feebler, and I stood and watched Till all was tranquil as dreamless sleep." The movement of the earth that he experiences here shows him that he is part of a moving, living universe. It is as if he has travelled with the spirit in God of nature. I think everyone could relate to Wordsworth's and Heaney's poems in someway: I know that I can relate to his feeling of a spirit in the woods. When I was lost I in the woods I felt as if someone was there showing where to go. The one thing we must all realise is that, we will all grow up: it is unstoppable and inevitable. I savour the thought. ...read more.