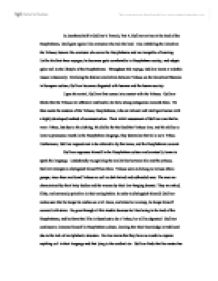 Gulliver does not Yahoo: He Houyhnhnms - An Analysis of Gulliver's Travels, Part 4.

In Jonathan Swift's Gulliver's Travels, Part 4, Gulliver arrives at the land of the Houyhnhnms, intelligent equine-like creatures who rule the land. Also inhabiting the island are the Yahoos, human-like creatures who serve the Houyhnhnms and are incapable of learning. Unlike his first three voyages, he becomes quite comfortable in Houyhnhnm society, and adapts quite well to the lifestyle of the Houyhnhnms. Throughout this voyage, Gulliver learns a valuable lesson in humanity. Realising the distinct similarities between Yahoos on the island and Humans in European culture, Gulliver becomes disgusted with humans and the human society. Upon his arrival, Gulliver first comes into contact with the Yahoos. Gulliver thinks that the Yahoos are offensive and bestial; he feels strong antagonism towards them. He then meets the masters of the Yahoos, Houyhnhnms, who are rational and intelligent horses with a highly developed method of communication. ...read more.

He goes through all this trouble because he likes being in the land of the Houyhnhnms, and he fears that if he is found out to be a Yahoo, he will be deported. Gulliver continues to immerse himself in Houyhnhnm culture, learning that their knowledge is traditional due to the lack of an alphabetic structure. He also learns that they have no words to express anything evil in their language and that lying is the cardinal sin. Gulliver finds that his master has difficulty conceptualizing lying, and he simplifies it into being misled. Lying, as far as the Houyhnhnms were concerned, is being led to believe something is short when it is long. Intrigued by this ignorance, Gulliver contrasts the mentality of Houyhnhnms and humans. Lying, a device used to deceive and mislead, is barely understood in Houyhnhnm land, yet "perfectly understood and universally practiced among humans." ...read more.

Due to his nakedness, the similarities in limbs and features between Gulliver and the female Yahoo are exposed. Consequently, Gulliver is banished from the land of the Houyhnhnms because they do not want him living in the house with his master as if he were a Houyhnhnm. Saddened by the fact that he has to leave, Gulliver reluctantly returns to England, where his family has been convinced that he is dead. He is filled with disgust and contempt for humans, convinced that they are nothing but filthy Yahoos. He is even disgusted by his own wife and children, and refuses to consort with them for an entire year. He buys two horses and converses with them for four hours each day. Clearly, Gulliver was impressed with Houyhnhnm society, a society perfect for Houyhnhnms, but hopeless for humans. He cannot exist in Houyhnhnm society because it is devoid of all that is human. Gulliver does not Yahoo: He Houyhnhnms An Analysis of Gulliver's Travels, Part 4 Due: Tuesday 6th April 2004 Camille Y. Gomez @01117935 British Foundation ...read more.