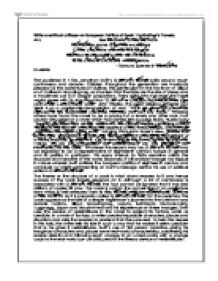 Write a satirical critique on European Politics of Book 1 in Gulliver's Travels. Ans. See the mind of beastly man, That hath so soone forgot the excellence Of his creation, when he life began, That now to chooseth, with vile difference, To be a beast, and lacke intelligence. - Edmund Spenser in The Faerie Queene First published in 1726, Jonathan Swift's Gulliver's Travels swirls around much controversy and debate. Children throughout the generation are invariably pleased by the adventures of Gulliver, the gentle giant in the toy-town of Lilliput or of Gulliver in Brobdingnag, so shrunken that the larks are the size of sheep and a household cat is of dragon proportions. Every child who has read the novel would agree with Dr. Arbuthnot that "Gulliver is a happy man that at his age can write such a merry work." John Wesley, the great religious reformer saw Book 4 as a passionate denunciation of war: "Man in general cannot be allowed to be reasonable creatures till they not war any more." Whereas others have found the novel to be a product of a lonely and bitter man, half crazed with anger at a world which had denied him success. Aldou Huxley says, "Swift's greatness lies in the intensity, the almost insane violence of that 'hatred of the bowels' which is the essence of his misanthropy, and which underlies the whole of his work." ...read more.

However, as Gulliver progresses his story, Lilliput ceases to be Utopia and becomes England itself, instead of being an example to England. Sycophancy is practiced by the court officials who will go to any length to win favors from the Queen and lords. Swift, thus through the episode of rope-dancing performed upon a "slender white thread" criticizes the obnoxious practices of court officials: "This diversion is only practiced by those persons who are candidates for great employments, and high favour at court." Gulliver further says, "But the danger is much greater when the ministers themselves are commanded to show their dexterity; for by contending to excel themselves and their fellows, they strain so far, that there is hardly one of them who hath not received a fall, and some of them two or three." The image of Lilliput as England becomes clear when Reldresal says, "We labour under two mighty evils; a violent faction at home, and the danger of an invasion by a most potent enemy from abroad."In Lilliput there are two struggling parties called "Tramecksan and Slameckson, from the high and low heels on their shoes, by which they distinguish themselves."These allude the Tories and Whigs, England's political parties and the potent enemy abroad is the island of Blefuscu which typifies France, England's arch-rival. The emperor of Lilliput wants Gulliver to invade Blefuscu and could think "of nothing less than reducing the whole Empire of Blefuscu into a province, and governing it by Viceroy; of destroying ...read more.

The main object of satire in the book is human nature itself, specifically man's pride as it manifests in "pettiness, grossness, rational absurdity, and animality" (Tuveson). Gulliver's character, as a satirical device, serves Swift's ends by being both a mouthpiece for some of Swift's ideals and criticisms and as an illustration of them so that people can recognize their follies and correct their vices. For critics such as Dobree, the book "is in a sense, a tragic work...in that it is the picture of man's collapse before his corrupt nature, and of his defiance in face of the collapse." However for Swift, humbling human pride, enabling a more honest self-assessment was absolutely vital to addressing the suffering and injustice so prevalent in human life. Contrary to many who label swift a misanthropist, only a man who cared deeply about humanity could have produced a work like Gulliver's Travels. As we travel with Gulliver, through the voyages, Swift brilliantly peels away our pride and pretensions, layer by layer, until he shows us what we are and challenges us, intensely and urgently, to be better. In the words of Louis A. Landa, "Many looked about and saw widely prevailing infection, a culture losing its vigor and its better values, under the impact of bribery, luxury, political faction...But only a person of the rarest gifts, such as Swift, could transmute these into an imperishable imaginative comment on the nature of man and society. ...read more.