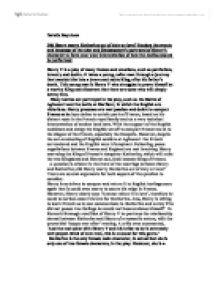 Did Henry marry Katherine out of duty or love? Explore the events and language of the play and Shakespeare’s portrayal of Henry’s character to form your own interpretation of how the ending should be performed

Henry V is a play of many themes and emotions, such as patriotism, bravery and desire. It takes a young, naïve man through a journey that moulds him into a brave and noble King, after his father’s death. This young man is Henry V who struggles to prove himself as a worthy King and discovers that there are some who will simply betray him.

Many battles are portrayed in the play, such as the Battle of Agincourt and the battle at Harfleur, in which the English are victorious. Henry processes are vast passion and desire to conquer France as helays claims to certain parts of France, based on his distant roots in the French royal family and on a very technical interpretation of ancient land laws. With the support of the English noblemen and clergy the English set off to conquer France much to the disgust of the French, especially the Dauphin. However, despite the out-numbering of English soldiers at Agincourt the French surrendered and the English were triumphant. Following, peace negotiations between France and England are met involving Henry marrying the King of France’s daughter Katherine, which will unite the two Kingdoms and Henrys son, shall become King of France.

A question is evident in the event of the marriage between Henry and Katherine; did Henry marry Katherine out of duty or love? There are several arguments for both aspects of the question to consider.

Henry is so driven to conquer and return it to English heritage once again that is could even marry to secure his reign in France. However, Henry clearly says ‘I cannot mince it in love’, therefore he could be serious about his love for Katherine. Also, Henry is willing to learn French so he can communicate to Katherine and surely if he did not posses true feelings he would not inconvenience himself?  In Kenneth Branagh rendition of Henry V he portrays the relationship shared between Katherine and Henry of a romantic nature, with the proverbial ‘happy ever after’ evening. A critic even commented, ‘And the end scene with Henry V and his bride-to-be is extremely well played. Kind of cute even, this is unusual for this genre.’

Katherine is the only female main character, in actual fact she is only one of two female characters, in the play. However, she is a significant character in the play as she typifies a female character in a very masculine play. She is portrayed as a beautiful woman whose plan is to find a suitable husband, regardless of what she really desires because of the masculine valve system surrounding her and her culture.  Katherine, too, excepts that her father has plans for her to marry a powerful man to secure his place in the French monarchy, so she too learns another language, however this is English. Shakespeare uses Katherine’s English lessons with Alice to highlight her role as a tool of negotiation among the men.

This student written piece of work is one of many that can be found in our University Degree Henry V section.