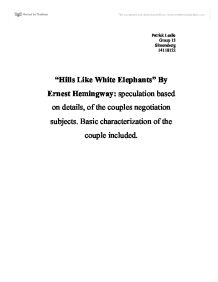 &quot;Hills Like White Elephants&quot; By Ernest Hemingway: speculation based on details, of the couples negotiation subjects. Basic characterization of the couple included.

Patrick Leslie Group 13 Simonsberg 14118122 "Hills Like White Elephants" By Ernest Hemingway: speculation based on details, of the couples negotiation subjects. Basic characterization of the couple included. Hemingway's "Hills Like White Elephants, demonstrates the relationship between an American man and a girl. What becomes central during their interactions is that they cannot communicate with one another. To gain a characterization of the couple the dialogue needs to be read more than several times and from several perspectives. Hemingway does make a simple character outline through the narrator but rather uses insinuations through the characters themselves. By doing this the reader and analyzer is forced to speculate when sketching the characters and deciphering what the subject of the argument is. ...read more.

Through this perspective the American's selfishness is clear. The American basically neither understands nor cares what Jig wants. To clarify the subject being about an abortion, the title illustrates the following, a pregnant woman looks like she has the stomach of an elephant. "White Elephant" is a euphemism for something nobody wants, in this case the baby. The couple's symbolic communication is similarly exposed by the way they never mention each others real names; they never call the operation an abortion, they simply call it an operation. They never call the fetus a baby, the American never calls the woman anything but Jig, and Jig never calls the man anything at all. ...read more.

The culmination of the American's pressurising comes when Jig bursts out and asks him to "please please please please please please please stop talking." At the end of the story the outcome cannot be seen as both partners have put up communication boundaries with regard to the subject of abortion. The walls do not suddenly appear in the end but have been in the story throughout the couple's interaction. Communication in this story is not for expression of feelings but is used rather as defensive mechanism for both characters. The couple struggle to speak about the subject as it is clear they both stumble over metaphors when referring to the operation. To understand the characters and the subject at hand the reader must take into consideration the implicit and figurative meanings of the text. 2 ...read more.