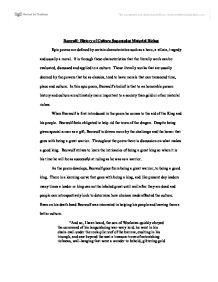 Beowulf: History of Culture Supersedes Material Riches Epic poems are defined by certain characteristics such as a hero, a villain, tragedy and usually a moral. It is through these characteristics that the literally work can be evaluated, discussed and applied to a culture. Those literally works that are usually deemed by the powers that be as classics, tend to have morals that can transcend time, place and culture. In this epic poem, Beowulf's belief is that to an honorable person history and culture are ultimately more important to a society than gold or other material riches. When Beowulf is first introduced in the poem he comes to the aid of the King and his people. Beowulf feels obligated to help rid the town of the dragon. Despite being given special armor as a gift, Beowulf is driven more by the challenge and the honor that goes with being a great warrior. Throughout the poem there is discussion on what makes a good king. ...read more.

...Wiglaf went quickly; keen to get back, excited by the treasure. Anxiety weighed on his brave heart-he was hoping he would find the leader of the Geats alive where he had left him helpless, earlier, on the open ground. So he came to the place, carry the treasure and found his lord bleeding profusely, his life at an end; again he began to swab his body. The beginning of an utterance broke out from the king's breast-cage. The old lord gazed sadly at the gold. To the everlasting Lord of all, to the King of Glory, I give thanks that I behold this treasure here in front of me, that I have been allowed to leave my people so well endowed on the day I die. Now that I have bartered my last breath to own this fortune, it is up to you to look after their needs. I can hold out no longer (Pg 91 lines 2752 - 2777, Pg 91 lines 2783 - Pg 92 lines 2801)." ...read more.

One of the reasons Beowulf was such a great king was that he had lived so long, experienced so many things, and had a significant number of stories to tell. These riches and gold were the items left to remember such events, Beowulf's idea was that if he left his people something tangible they would tell stories and the history of their culture would be passed from one generation to another. People would go somewhere (such as what we call a museum today) and say, "do you see that shield, and sword, that is the very shield and sword that Beowulf the great warrior and king used to free the town from the evil Grendel that ravaged our people for over 20 years, moons and suns, before us." This is the type treasure that Beowulf was talking about. As an honorable person, he realized that his history and culture are ultimately more important to a society than gold or other material riches. As an honorable king, Beowulf realized that he could do something to preserve not only his honor, but to also make his society and culture a better place. ...read more.