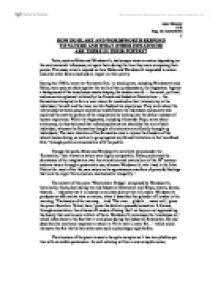 How do Blake and Wordsworth respond to nature and what other influences are there in their poetry?

HOW DO BLAKE AND WORDSWORTH RESPOND TO NATURE AND WHAT OTHER INFLUENCES ARE THERE IN THEIR POETRY? Poets, such as Blake and Wordsworth, had unique views on nature depending on the environmental influences; set upon them during the time they were composing their poems. This essay aims to expand on how Blake and Wordsworth responded to nature and what other factors had had an impact on their poetry. During the 1780's, came the 'Romantic Era,' in which poets, including Wordsworth and Blake, were seen as rebels against the work of their predecessors, the Augustans. Against a background of the tumultuous events shaping the modern world - the social, political, and economic upheaval initiated by the French and Industrial Revolutions - the Romantics attempted to form a new vision for mankind as their interests lay in the individual, the self, and the inner world of subjective experience. They wrote about the relationship between people and nature and between the individual and society and explored the creative powers of the imagination by looking into the darker recesses of human experience. While the Augustans, including Alexander Pope, wrote about aristocracy, as they believed that refined sophistication should be the aim of each individual, whereas the Romantics thought of aristocrats as artificially brought up individuals. The main intention of the Romantics was to rejoice the freedom of the natural human being, as well as to go up against any forced limitation on the 'unrefined folk,' through poetic communication with the public. ...read more.

The use of capitalizing in '...every Man,' and '...every Infant's...' creates a kind of universality. Repetition is used again, 'in every...' and this accentuates the fact that everybody is upset. The most significant poetic technique used in this poem, is the paradox formulating between the words 'wander' and 'charter'd' as 'wander' indirectly refers to freedom and 'charter'd' refers to restriction, which contradict in definition. Blake also uses another indirect paradox in '...youthful Harlot's' as 'youthful' gives an impression of chastity whereas 'Harlot's,' in this poem means the prostitutes on the streets, which then gives an impression of immorality. Therefore, the content of the two poems, 'Westminster Bridge' and 'London' differ enormously as 'London' produces a restricted view of London whereas 'Westminster Bridge' generates a liberal view of London. The structure of 'London' is simple, with verses, whereas the structure of 'Westminster Bridge' is sophisticated, as it is written in one complete verse and the language utilized by both poets is simple but appealing. In 'Daffodils,' Wordsworth, though flashing 'upon that inward eye', portrays nature as a poignant power, where nature is originated within the 'Daffodils.' Wordsworth uses the phrase 'golden daffodils,' which denotes nature as being inexpressibly pure and valuable, as well as giving the daffodils a significant radiance. The poet re-evaluates his emotional response to nature in 'my heart with pleasure fills,' suggesting the way the he feels at the display of the daffodils. The 'daffodils' are 'dancing in the breeze' implies that the cheerful human celebrations were lost due to the political circumstances going on during the Industrial Revolution. ...read more.

Blake uses straightforward language features, such as alliteration ('heard on the hill'), which enhances on the simplicity of the poem. Repetition has also been used, 'come come' and 'No no,' in order to emphasize the happiness within the children. The vocabulary used by Blake is not complex at all, such as 'green' and 'little,' as it is aiming for the 'unrefined folk'. One of the most significant language feature used by Wordsworth is the personification he uses to incarnate 'she' as the young poet of Nature. He also uses inverted word order, 'So through the darkness and the cold we flew,' and alliteration, 'hunted hare,' in order to make the poem more appealing. He uses the simile 'like an untired horse,' as to produce an image of him being unique. The vocabulary used by Wordsworth is more complex than that of Blake's, such as 'tumult' and 'melancholy,' which formulates a more sophisticated poem. Therefore, it could be concluded, that the content of 'Nurse's Song' and 'The Prelude (ii)' are quite similar as they both talk about some sort of child hood, and how liberal it was. This is typical of the two poets, as the Romantics believed that children were much closer to nature, than adults. The structure of both poems differ as 'The Prelude (ii)' is written in a whole verse (very long verse) whereas the 'Nurse's Song' is written in four separate stanzas. Overall, it could be seen that Blake views nature through a pessimistic whereas Wordsworth views nature through an optimistic eye. Wordsworth's style of writing is more complex and sophisticated than that of Blake's. Aqsa Mansoor 10 B Eng. Lit. Coursework 1 ...read more.