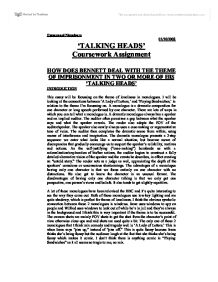 How does Bennett deal with the theme of imprisonment in two or more of his 'talking heads'.

Emmanuel Ntombura 01/10/2003 'TALKING HEADS' Coursework Assignment HOW DOES BENNETT DEAL WITH THE THEME OF IMPRISONMENT IN TWO OR MORE OF HIS 'TALKING HEADS' INTRODUCTION This essay will be focussing on the theme of loneliness in monologues. I will be looking at the connections between 'A Lady of Letters,' and 'Playing Sandwiches,' in relation to the theme I'm focussing on. A monologue is a dramatic composition for one character or long speech performed by one character. There are lots of ways in which you can tell what a monologue is. A dramatic monologue always has a speaker and an implied auditor. The auditor often perceives a gap between what the speaker says and what the speaker reveals. The reader also adopts the POV of the auditor/speaker. The speaker also nearly always uses a case-making or argumentative tone of voice. The auditor then completes the dramatic scene from within, using means of interference and imagination. The dramatic monologue presents a 2-step sequence: we enter what looks like a normal situation, but become aware of discrepancies that gradually encourage us to suspect the speaker's reliability, motives and actions. As the self-justifying ("case-making") bombards us with a rationalisation/explanation of his/her actions, the auditor begins to construct a fully detailed alternative vision of the speaker and the events he describes, in effect creating an "untold story." The reader acts as a judge as well, appreciating the depth of the speakers' conscious or unconscious shortcomings. The advantages of a monologue having only one character is that we focus entirely on one character with no distractions. We also get to know the character in an unusual format. The disadvantages of having only one character talking is that we only get one perspective, one person's views and beliefs. It also tends to get slightly repetitive. A lot of these monologues have been televised the BBC and it's quite interesting to see the way they come out. ...read more.

Basically the quote is saying that she has done enough damage with these letters and if she writes another one, she'll be sent to prison. She does write another letter and so the police come over to her house. The police ask her, "Was it you who'd been writing these letters?" Even with the police she still has an attitude. She then asks, "Why are you asking me?" They reply by saying: "...Because who was it who wrote to the chemist saying his wife was a prostitute? Who was it that gave the lollipop man a nervous breakdown?" These are some of the examples of what kind of letters she was writing. The monologue then takes an unexpected turn when we find out that the kid across the street dies. Irene asks, "What of Neglect? She said, 'No. Leukaemia.'" Up to this point in the monologue there is no reason to doubt her assumptions. This quote is like the turning point in the monologue, we as the audience are starting to get more involved. We actually feel as if we're there and start to get more emotional. This is like the climax if you like. She then ends up in prison as expected. I think the past plays a great part for the reason as to why Irene and Wilfred are lonely and isolated today. Wilfred always seems to be reminded of his past somehow and that affects the way he is today and is the reason he is isolated. Everywhere he goes he seems to remind of his past. Especially at his work place, people are always recognising him from previous places. For example, a policeman asks, "Weren't you a lollipop man once?" Even Irene mentions something about a "Lollipop man," interfering with children once as well. There is a connection here between to the 2 monologues. Maybe Irene and Wilfred are linked in someway. ...read more.

Whereas with Wilfred they don't seem to change because I know their history and backgrounds and that's where I make my decisions. That is why I didn't sympathise with Wilfred. I found 'A Lady of Letters' more convincing than 'Playing Sandwiches.' This is because I know where Irene was coming from and what she did was not really a crime she just "disturbed the peace." With Wilfred I see his composition more as a warning if anything else, that no matter how hard people try, in some situations some people will never be able to change which is why we should always be aware of our surroundings because you never quite know where crazy people are. Both monologues are also about people denying the truth about themselves. This is because although both Wilfred and Irene know they have problems, they deny it not once but severally which makes it worse in the end and as a result they become even more lonely and isolated. This is the reason they both end up in prison; it's because of their lack of awareness and fail to admit their problems. In conclusion, I found 'A Lady of Letter' more convincing and moving than the other one because Irene was relating to something that we can all sympathise with her for whereas Wilfred just makes us feel sick that he can't even change. The only thing I got out of "Playing Sandwiches was a warning." A warning to never lie and do deceitful things because they will come back to you. But from Irene if there's one thing I learnt, is that I should always be willing to accept the truth about myself and do something about it. Although this message came across in 'Playing Sandwiches,' it came across clearer in 'A Lady of Letters," as I felt I could relate to Irene's situation more. We should always be self aware of other people's feelings and emotions otherwise we will turn out just like Wilfred and Irene, lonely and isolated. ...read more.