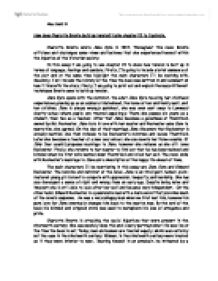 How does Charlotte Bronte build up tension? Using chapter 23 to illustrate.

How does Charlotte Bronte build up tension? Using chapter 23 to illustrate. Charlotte Bronte wrote Jane Eyre in 1847. Throughout this novel Bronte criticises and challenges some views and believes that she experienced herself within the injustice of the Victorian society. In this essay I am going to use chapter 23 to show how tension is built up in terms of language, feelings and symbols. Firstly, I'm going to include a brief summery of the plot and at the same time highlight the main characters I'll be working with. Secondly, I will include the history of the time the book was written in and comment on how it links with the story. Finally, I am going to point out and explain the many different techniques Bronte uses to build up tension. Jane Eyre opens with the narrator, the adult Jane Eyre recalling her childhood experiences growing up as an orphan at Gateshead, the home of her unfriendly aunt, and her children. Jane is always wrongly punished, she was even sent away to Lowwood charity school where pupils are treated appallingly. There she passes six years as a student, then two as a teacher. ...read more.

Later on in chapter 37 Mr. Rochester is comparing himself with the "the old lightening-struck chestnut tree" which reminds the reader that what happened was exactly as foreshadowed in chapter 23. The way Bronte uses questions to convey the status of power in both chapter 23 and 37 builds up a great deal of apprehension for the reader. In chapter 23 Rochester is asking Jane many questions he very well know their answers, "you must have become in some degree attached to house?" and "we have been good friends, Jane; have we not?" These questions and many others show clearly that Mr. Rochester is using his powerful position as Jane's employer to tease her, and since she is dependent on him for her living she can't by any mean treat him in the same way he treats her. This would draw the readers into the story by setting up expectations of what will happen later on, as they know that Jane had always refused to be dominated and that resulted in angry outbursts against people trying to control her. In the early chapters she returned the same bad treatment back to her cruel cousin. ...read more.

The opening of chapter 38 without a doubt will shock readers in the 19th century as well as readers nowadays. Jane says: "Reader, I married him". This proves how powerful and controlling Jane has become; she did not say usual stereotypes like "we got married" or "he married me", which illustrates that she did not only become more powerful financially but also on the gender bases. The fact that Jane is the narrator creates a huge amount of anxiety to the reader. This is because the reader will wonder where she is in the future and what happened to her. This as a result will make the reader more attached to the book to find out. To conclude, I think that Jane Eyre is an interesting book that will appeal to readers both now and in the 19th century as some of the injustices are still occurring today. Bronte used many techniques in this book to build up tension. For example she uses the method of 'Pathetic Fallacy' as well as many symbols to create suspense. She also uses aspects from the history of her time like class boundaries, equality very effectively to make the reader more anxious. Another way in which Bronte creates tension is by using the shifts in power between Jane and Rochester. ?? ?? ?? ?? Alaa Said :) ...read more.