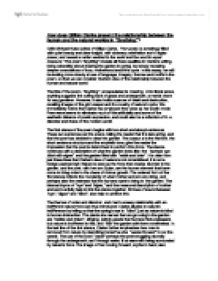 How does Gillian Clarke present the relationship between the human and the natural worlds in &quot;Scything&quot;?

How does Gillian Clarke present the relationship between the human and the natural worlds in "Scything"? Critic Michael Hulse writes of Gillian Clarke, "Her poetry is arrestingly filled with quiet beauty and clear insight, with visionary celebration and elegiac power, and reveals a writer wedded to the world and the word in equal measure." The poem "Scything" reveals all these qualities in Clarke's writing, being ostensibly about clearing the garden in spring, but slowly revealing deeper connotations of loss, motherhood and life's cycle. In this essay, we will be looking more closely at use of language, imagery, themes and motifs in the poem, so that we can consider Clarke's view of the relationship between the human and natural world. The title of the poem, "Scything", encapsulates its meaning. In its literal sense, scything suggests the cutting back of grass and undergrowth, a menial chore for any gardener. However, it also holds nuances of death and destruction, recalling images of the grim reaper and the cruelty of nature's cycle. We immediately notice that Clarke has employed free verse as her poetic mode. ...read more.

The short, terse, immediate sentences of the second stanza also reflect the chaos that ensues as humans attempt to bring order to nature, although stanzaic regularity is maintained. The blade of the scythe is sticky, as if it is bloody from a murder. Indeed, the poet has yolk, albumen and blood on her hands, a more forceful and explicit image of the killing. Yolk is the nutrient for the baby bird, and albumen protects the unborn animal in its egg, and the reader's knowledge of this compounds the horror of the image. "Fragments of shell are baby-bones" is a powerful and emotive metaphor. It likens the broken shell of the egg with the broken bones of a baby, putting emphasis on our being witness to the death of a new life. The compound word "baby-bones" is shocking and distressing, and is made more emphatic by the alliterative repetition of the "b" sound. The delicate shell, and the image of albumen as a protective fluid all point to the heartbreaking fragility of new life, and to the ease with which it can be destroyed. ...read more.

The warmth of the fluids in the egg reminds the poet of the warmth of human birth fluids, and the reader is brought back to the empathetic bonds of loss and motherhood between human and bird. Chaos is destructive. Nature's feral force fills the garden with weeds, and so destroys its order. The humans' intrusion into the natural world in an attempt to restore order ultimately brings destruction to the warbler's nest. Yet chaos also represents power, creative energy, and the life-force itself. The relationship between man and the natural world is an ambivalent one, with humans being part of this world, and yet often in conflict with it. An ordered world cannot tolerate the uncontrolled operation of such an incomprehensible power, and yet a too-ordered world, one that too successfully represses nature's force, becomes sterile and meaningless. The fact that the warbler chick, symbol of new life and hope, has been sacrificed to the world of order, underscores this concept. There is, however, a final hint that nature and man can be reconciled: the poet identifies with the mother warbler's loss, and reflects on her own role as a mother, nurturing her child only to have to endure his flight from the nest. ...read more.