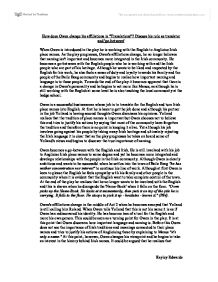 How does Owen change his affiliations in &quot;Translations&quot;? Discuss his role as translator and 'go-between'.

How does Owen change his affiliations in "Translations"? Discuss his role as translator and 'go-between' When Owen is introduced in the play he is working with the English to Anglicise Irish place names. As the play progresses, Owen's affiliations change, he no longer believes that naming isn't important and becomes more integrated in the Irish community. He becomes a go-between with the English people who he is working with and the Irish people who are part of his heritage. Although he wants to be liked and respected by the English for his work, he also feels a sense of duty and loyalty towards his family and the people of the Baile Beag community and begins to realise how important naming and language is to these people. Towards the end of the play it becomes apparent that there is a change in Owen's personality and he begins to act more like Manus, as although he is still working with the English at some level he is also teaching the local community at the hedge school. ...read more.

"Owen picks up the Name-Book. He looks at it momentarily, then puts it on top of the pile he is carrying. It falls to the floor. He stoops to pick it up - hesitates - leaves it." (P84). Owen's affiliations change in the middle of Act 2 when he becomes annoyed that Yolland is still calling him Roland. When Owen tells Yolland that this is not his name it is as if Owen has rediscovered his identity. He has become less of a tool for the English and more his own person. This could be seen as a turning point for Owen in the play. It is at this point that Owen discovers how important language and naming is. Before this Owen does not see the importance of Irish traditions and meanings connected to their place names and tries to justify his actions of Anglicising these by explaining to Manus "it's only a name." At this point, however, Owen changes his viewpoint and he begins to take an interest in the history behind Irish names. ...read more.

Owen's role in the play takes a drastic turn when he looses interest in his job and becomes fully involved with learning about the traditions behind the names. It is at this point in Act 3 that the audience can see a remarkable change in Owen's personality. Despite the fact that he is still being hired by the English to Anglicise the Irish place names he rebels against them keeping some of the Irish names and supporting the community when the English try to take control of the village because of Yolland's disappearance. It can also be said that he is a go-between with the English and Irish. Although he wishes to be successful in his work at the end of the play he becomes responsible for the hedge school and it is evident that he is taking over Manus' job. The audience can also see that after the English make threats to the community Owen resents their presence and his job and for this reason he puts himself in the position of being a major part of the hedge school. Kayley Edwards ...read more.