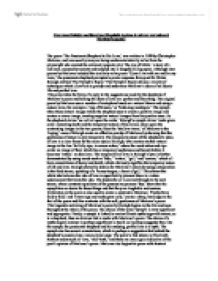 How does Raleigh use literal and linguistic devices to mirror and subvert Marlowe's poem? The poem 'The Passionate Shepherd to His Love,' was written in 1599 by Christopher Marlowe, and was seen by many as being uncharacteristically na�ve from the playwright who created the extremely popular play 'the Jew of Malta,' a story of a rich man, rejected by society and tempted into a vengeful killing spree. Although later poems by Marlowe included the similarly na�ve poem 'Come Live with me and be my Love,' the passionate shepherd prompted a poetic response from poet Sir Walter Raleigh entitled 'The Nymph's Reply.' The Nymph's Reply utilises a variety of techniques which allow him to parody and undermine Marlowe's ideas of an Edenic life and perfect love. The poem takes the form of a reply to the suggestions made by the shepherd of Marlowe's poem and balking his ideas of love as a perfect and free thing. ...read more.

The temporality of love in Raleigh's eyes is further demonstrated by using words such as 'fade,' 'winter,' 'gall,' and 'sorrow,' which all have connotations of decay and death, which obviously signifies the temporary nature of life and love. Raleigh shows his distain for Marlowe's ideals by using juxtaposition in the third stanza, speaking of a 'honey tongue, a heart of gall.' This shows that whilst she believes the idea of love is superficially pleasant there is a rotten undercurrent that taints the idea. The disdainful air is carried through to the next stanza, where constant repetitions of the possessive pronoun 'thy,' show that the nymph has no desire for these things and that they are laughable and useless. Alliteration in the poem is also used to create a contrast to Marlowe. 'Flocks from field to fold,' and 'rivers rage and rocks grow cold,' create a sharp, hard edge to the feel of the poem and this contrasts with the soft, gentleness of Marlowe's poem The linguistic satirizing of Marlowe's poem by Raleigh begins in the title and runs throughout the whole of his poem. ...read more.

The stanza begins with a conditional word, which indicates scepticism or uncertainty in the ideals he is about to mock. The lexis of the second stanza is clearly an imitation of Marlowe's own natural lexis, using words such as 'rivers,' 'birds,' 'fields,' etc, which are imitated by Raleigh, 'rivers,' 'rocks,' 'flocks.' The poet also chooses a predominantly negative lexis, using words such as 'fade,' 'no,' and 'nor,' throughout the poem. This creates a harsh feel to the poem and shows the rejection of the concepts of Marlowe's poem. Structurally the two poems are extremely similar. Both consist of 6 4-line stanzas with an AABB rhyme scheme. Raleigh chose to mimic the structure of Marlowe's poem because the structure is indicative of the poems basic nature and naivety. The structural imitation ensures that no misunderstandings of the poet's intentions could be made, as the exact replication would have been obvious to Marlowe, and the suggestion that his poem was basic to the point of naivety would have been evident. ...read more.