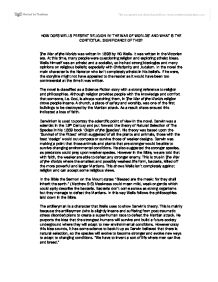 How does Well's present religion in the 'War of the Worlds' novel and what is the significance of this?

HOW DOES WELLS PRESENT RELIGION IN 'THE WAR OF WORLDS' AND WHAT IS THE CONTEXTUAL SIGNIFICANCE OF THIS? The War of the Worlds was written in 1898 by HG Wells. It was written in the Victorian era. At this time, many people were questioning religion and exploring atheist ideas. Wells himself was an atheist and a socialist, so he had strong ideologies and many opinions on religious beliefs; especially with Christianity and Judaism. In the novel the main character is the Narrator who isn't completely atheist in his beliefs. If he were, the storyline might not have appealed to the reader as it would have been too controversial at the time it was written. The novel is classified as a Science-Fiction story with a strong reference to religion and philosophies. Although religion provides people with the knowledge and comfort that someone, i.e. God, is always watching them, in The War of the Worlds religion drove people insane. A church, a place of safety and worship, was one of the first buildings to be destroyed by the Martian attack. As a result chaos ensued this indicated a loss of faith. Darwinism is used to portray the scientific point of view in the novel. ...read more.

"We have to invent a sort of life where men can live and breed." Wells uses one character to represent religion, the curate who was training to be a priest. When the church was destroyed by the Martian's heat-ray, he soon falls apart and believes he has committed sins and that God is angry with him. "Everything gone - everything destroyed...The end. The great and terrible day of the Lord" This shows Wells' criticism towards religion; he believes it is a product of society that creates the feelings of guilt. Another criticism can be found later in the same scene where flames in the distance seem to distract the curate when the narrator first meets him. The narrator wants water but the curate is focused on the fire, which symbolizes hell and eternal punishment. However, the narrator is in search for water which represents life. In this portrayal Wells demonstrates that religion ignores the concerns in life but focuses on only the afterlife. The curate is made out to be a stereotypical priest. As soon as the church is destroyed he becomes scared and weak. ...read more.

As He is being described as dark it shows that God can no longer guide His people and He has let them down. Religion is threatened when the people of Surrey find out there are other life forms besides themselves and the known animal kingdom. An obvious conclusion to come to is that these Martians are superior to the human race and therefore should be closer to God. In order to communicate with the Martians, the curate walked towards the extra-terrestrials and recited Bible verses. However his attempt failed and he was attacked by the heat ray. HG Wells was attempting to rationalize religion and science in the novel. The aliens' visitation from Mars questions the religious beliefs, that Man on Earth is the only significant presence in the universe. The existence of beings from other planets can be more readily accepted scientifically than through religious teachings. In the novel, HG Wells shows that even the smallest creatures on Earth, the bacteria can overcome the powerful forces of the enormous Martians despite the curate's many attempts through prayer. This demonstrates the supremacy of science over the authority of God and religion. However it does show that there will always be controversial opinions on this matter. ...read more.

This student written piece of work is one of many that can be found in our University Degree H.G. Wells section.