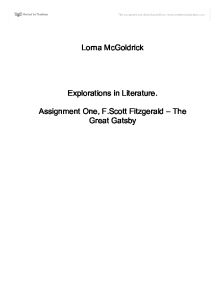 How far do you agree that The Great Gatsby is a moral work? What do you think Fitzgerald is saying about American society in the period through the characters in the novel?

Lorna McGoldrick Explorations in Literature. Assignment One, F.Scott Fitzgerald - The Great Gatsby Q. How far do you agree that The Great Gatsby is a moral work? What do you think Fitzgerald is saying about American society in the period through the characters in the novel? The author of The Great Gatsby, Francis Scott key Fitzgerald was born in Minnesota. He grew up in an upper- middle class family. The Great Gatsby, first published in 1925, which Fitzgerald himself considered a masterpiece. It attained excellent review, with T.S. Eliot being among the first to comment on the book, calling it, "the first step that American fiction has taken since Henry James." (Web 1) More recent Tony Tanner claimed it to be "the most perfectly crafted work of fiction to come out of America." (Tanner, 2000). The Great Gatsby is set in the 1920's, a period when business was booming and a time of material demands, a period hailed as the "jazz age" by the author. The Fitzgerald's had belonged to the "jazz age", and doubtless enjoyed the trappings of the era. It is my belief that the novel is a satirical view of American society in the 1920's. ...read more.

Another reflection on the immoralities of the period is how Gatsby makes his money. We discover that, through his dealings with Dan Cody, he has made his fortune by illegal sale of alcohol. As Gatsby's wealth grew he moved to New York. His house is located in West Egg. The house is described as a rather artificial place, "it was a factual imitation of some Hotel De Ville in Normandy, with a tower on one side, spanking new under a thin beard of raw ivy, and a marble swimming pool" Pg 11. Here we see how wealth is used to provide an artificial fa�ade to Gatsby's life. The location of Gatsby's house is chosen as an attempt to impress Daisy with his so-called wealth, a clear misuse of his ill gained money. Gatsby's house is furnished to a very high standard, but these books and antiques are just Gatsby's way of showing off his wealth to others. However Gatsby does not really care for materialism, we can tell this because his bedroom, the only room he really ever uses, is empty compared to the rest of the house. The whole illusion of his lifestyle, house and parties, hide his main goal in life, to win the love of Daisy. ...read more.

He shows us that a society that once lived by strict moral and ethical codes and a belief in democracy and equality for all has been corrupted by the new world that grew up after World War 1. In the 1920's people had discovered new wealth and freedoms but then began living their lives extravagantly and excessively, disregarding everything and everyone that were not a part of their 'social class'. This was the world of the East. The world of the West, where Nick arrived from, was quite different. Their world still reflected the morals and beliefs of the first settlers. It was a moral world where anything was possible, where dreams could come true. Gatsby was also from this world, but his dreams were destroyed in the East by its corruption and his own faulty visions. The novel, although set in America in the 1920's, could relate to any country and any period of time. Everyone who reads this novel can take something away from it, a lesson, a lesson that people and feelings mean more than money and materialistic trappings. Biblography : Tanner, Tony. The American Mystery: American Literature from Emerson to DeLillo. Cambridge: Cambridge University Press. 2000. (Web 1) http://www.helm-information.co.uk/fsfitzgerald.htm - accessed 7th March 2003 Reference - Penguin Popular Classics - The Great Gatsby (1994) - York Notes on The Great Gatsby (1980) 2 ...read more.