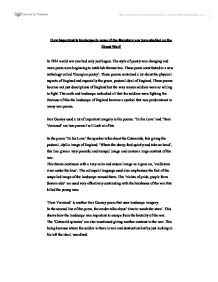 How important is landscape in some of the literature you have studied on the Great War?

How important is landscape in some of the literature you have studied on the Great War? In 1914 world war one had only just begun. The style of poetry was changing and more poets were beginning to establish themselves. These poets contributed to a new anthology called 'Georgian poetry'. These poems contained a lot about the physical aspects of England and especially the green, pastoral ideal of England. These poems became not just descriptions of England but the very reason soldiers were so willing to fight. The earth and landscape embodied all that the soldiers were fighting for. Because of this the landscape of England became a symbol that was predominant in many war poems. Ivor Gurney used a lot of important imagery in his poems. 'To his Love' and 'Near Vermand' are two poems I will look at of his. In the poem 'To his Love' the speaker talks about the Cotswolds, this giving the pastoral, idyllic image of England. ...read more.

'Dead Man's Dump' written by Isaac Rosenberg contains images of landscape in many different ways. Rosenberg personifies the earth as the landscape and uses it as an escape from the war for the soldiers. The war is that terrible that it is no longer thought terrible to die, 'Earth! Have they gone into you!' In the seventh stanza the earth is personified again. Instead of the usually good and bounteous image that is given to the earth, Rosenberg describes it as 'Maniac Earth!' The descriptions are continued, 'Dark Earth! Dark Heavens!' This language is used to emphasise the destruction of Earth and its landscape and even making the 'bounteous' earth 'dark!' Wilfred Owens' poem 'Spring Offensive' shows the importance of landscape from the very first line. 'Halted against the shade of a last hill' this gives the image of a hilly landscape that the soldiers are using as their last shelter before going over the top. ...read more.

The image used here makes England something to be proud of and worth fighting for. D.H Lawrence's article on the war helps show the natural beauty of the world before the war.'...Beautiful blue sky, and white clouds...this is just a year ago but it seems to belong to some period outside of time.' Lawrence then writes a huge paragraph about landscape. He describes 'a beautiful greenish globe of light' this presumably being a bomb. 'It was beautiful beyond belief. Then dark.' This shows how the war effects everything in the landscape emphasising everything around whilst the bombs blow up. Lawrence is totally unaware and detached from his emotions at this time and is writing like an outsider jus looking at the view. This shows how much of an escape the landscape was from war. Landscape is very important as an escape from the war as well as being the reason to fight in war. The landscape also shows how unnatural the war is. The way the landscape contrasts with the war shows what damage was caused and helps readers of the present day to understand more about the damage war caused. ...read more.