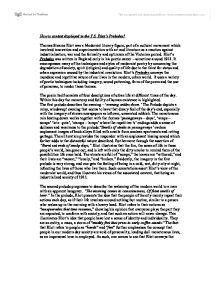 How is context shown in T.S. Eliot's Preludes

How is context displayed in the T.S. Eliot's Preludes? Thomas Stearns Eliot was a Modernist literary figure, part of a cultural movement which involved innovation and experimentation with art and literature as a reaction against industrialisation, war and the formality and optimism of the Victorian period. Eliot's Preludes was written in England early in his poetic career - sometime around 1911. It encompasses many of the techniques and styles of modernist poetry by concerning the degradation of society, spirit (religion) and quality of life due to the thirst for status and urban expansion caused by the industrial revolution. Eliot's Preludes conveys the mundane and repetitive nature of our lives in the modern, urban world. It uses a variety of poetic techniques including imagery, sound patterning, form of the poem and the use of personae, to render these themes. The poem itself consists of four descriptions of urban life at different times of the day. Within this day the monotony and futility of human existence is highlighted. The first prelude describes the evening - 'evening settles down.' The Prelude depicts a rainy, windswept evening that seems to have that dreary feel of the day's end, especially with the imagery of strewn newspapers as leftover, unwanted rubbish. The monotonous rain beating down works together with the rhymes 'passageways - days', 'wraps - scraps' 'lots -pots', 'stamps - lamps' where the repetitive 's' endings adds a sense of dullness and weariness to the prelude."Smells of steaks in passageways' evokes unpleasant images of back alleys filled with smells from unclean apartments and rotting garbage. ...read more.

The negative imagery is returned to the start of the third prelude which portrays the dark early hours of the morning. In this section of the poem the persona begins to use 'you' in an almost authoritative tone. "You" in such a context, depicts any one of the many 'lifeless' people living in this dystopian society. The "thousand sordid images" which "constitute" the watched person's soul, are, presumably, the same types of images which have been previously related, images of grime and squalor. However, "The light crept up between the shutters" symbolically allows a truth to creep through the dark monotony of life, and the "sparrows in the gutters" symbolise hope in destitution. The persona realises that the people go through their routine every day, without even realizing that there is in fact hope for change, and that they are missing out in life. The people are so entrenched in their everyday lives that they cannot step back and view their lives from the outside, as the person does. It understands something about them that they themselves do not. In the last lines of the poem, the persona clasps "the yellow soles of feet in the palms of both soiled hands." Such a line is ironic in the sense that sole is a synonym of soul, and soiled can not only mean unclean but also corrupted. ...read more.

than like old women gathering broken pieces of driftwood for fire.'Wipe your hand across your mouth, and laugh; The worlds revolve like ancient women Gathering fuel in vacant lots.' By wiping a hand across the mouth and laughing the persona could be doing so bitterly, due to the obvious way that society is slumping into depression rather than happiness. The fact that the world is likened to the ancient women gathering fuel means that humans try to do so much for happiness by believing that seeking fame and fortune can bring it, but in reality, this quest is in vain (such as looking for something in an empty space) with mankind ending up probably just as satisfied as when he started. Preludes draws greatly from the styles and subjects characteristic of Modernism. The feelings of despair and of the dystopia within the poem (which is meant to reflect reality) are fairly typical of the period. Eliot's concern with the loss of religion and also the destruction of nature are clearly influenced by the ideals and standards of this genre. The Preludes are in fact not preludes to anything better at all, (irony in the title); they speak of how city-life and urban expansion will lead to destruction and spiritual chaos. It is mankind and his spirit who is suffering, but it is also he who is causing the world and all that is in it to suffer as well. Jasandeep Bhatti ...read more.