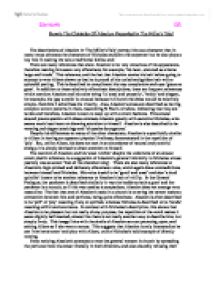 How Is The Character Of Absolon Presented In The Miller's Tale?

How Is The Character Of Absolon Presented In The Miller's Tale? The descriptions of Absolon in 'The Miller's Tale' portray him as a character that in many ways contrasts the characters of Nicholas and John the carpenter but he also plays a key role in making the tale a traditional fabliau and There are many references that show Absolon to be very conscious of his appearance, therefore making him seem very effeminate, for example, 'his heer...strouted as a fanne large and brode'. This reference, and the fact that Absolon combs his hair before going to attempt to woo Alison shows us that he is proud of his curled and golden hair with a splendid parting. This is described to compliment his rosy complexion and eyes 'greye as goos'. In addition to these relatively effeminate descriptions, there are frequent references which mention Absolon and his attire being 'ful smal and properly', 'fetisly' and elegant, for example, his 'gay surplis' is unusual because in Church the dress would be relatively simple, therefore it advertises his vivacity. Also, Absolon's shoes are described as having complex woven patterns in them, resembling St Paul's window, indicating that they are lavish and therefore, Absolon is keen to keep up with current fashions. This almost absurd preoccupation with dress contrasts Absolon greatly with secretive Nicholas, who seems much less intent on drawing attention to himself. ...read more.

This illustrates Absolon's gaiety of temperament and draws yet another contradiction between his and Nicholas's characters. It appears that all the references to Absolon being such an effeminate character, in almost direct contrast with Nicholas in many ways, he is almost comically out of place in such a plebeian setting. The comparisons made between Nicholas and Absolon can perhaps be explained in lines 284-5 'alwey the nire slie maketh the ferre leeve to be looth' suggesting that Absolon's intentions of successfully wooing Alison are dashed immediately because Nicholas lives under the same roof as her, thus, Absolon is 'out of sight and out of mind'. The fact that Absolon's quest to woo Alison begins after she has already agreed to commit adultery with Nicholas indicates that his case is almost defiantly lost before he had opened it. Also, despite both of the characters sharing the common intention of wooing Alison, despite the suggestion that Nicholas is slightly more sincere, the characters completely contrast each other in their approach to Alison. Nicholas is direct and forthright, whereas Absolon attempts to woo her by 'meenes and brocage'; giving her presents and also offering gifts of money. Absolon addresses Alison as 'deere lady' in line 253, which is an entirely inappropriate attempt to make himself appear like a courtly lover and Alison has clearly a good sense to ignore his advances. ...read more.

heer, and as the gold it shoon, and strouted as a fanne large and brode'. These particular lines are quite powerful; they do not only provoke a vivid image, but also make a comparison to Absolon's biblical namesake, showing that he too is proud of his hair. Also, Absolon is described to have 'Poules window corven on his shoos' which, as such a precise metaphor, not only illustrates his preoccupation with dress and current fashions but, provides us with a very detailed mental picture of the shoes. The descriptions being so vivid leave the reader with images planted clearly in their head, no thought is required to obtain mental pictures of the characters and their attire. The religious story of Noah's Ark rescuing his family from a flood intended to drown sinners and wash away sins. The idea is similarly used at the climax of the 'Miller's Tale', when the fictional 'flood' created by Nicholas provides social retribution for adultery, paralleling God's punishment for licentious people. The love rivalry between Nicholas and Absolon allowed for comic procedures following the adultery committed by Alison. The character of Absolon is perhaps not the most important in the tale, but does serve a very important role in many of the key themes of the fabliau, like courtly love. Chaucer has used many common language techniques to emphasise the importance of Absolon and also to portray the image of his character in comparison with others. Z�e North 12fii ...read more.