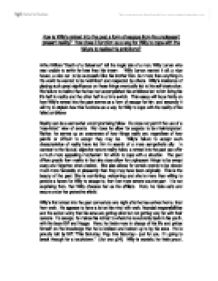 How is Willy&amp;#146;s retreat into the past a form of escape from his unpleasant present reality?&amp;nbsp; How does it function as a way for Willy to cope with the failure to realize his ambitions?

How is Willy's retreat into the past a form of escape from his unpleasant present reality? How does it function as a way for Willy to cope with the failure to realize his ambitions? Arthur Millers "Death of a Salesman" tell the tragic tale of a man, Willy Loman who was unable to settle for less than his dream. Willy Loman wanted it all; a nice house, a nice car ,to be successful like his brother Ben, but more than anything in the world he wanted to be 'well liked' and respected by others. Willy's insistence of placing such great significance on these things eventually led to his self-destruction. His failure to realize that he had not accomplished his ambitions led to him living his life half in reality and the other half in a time switch. This essay will focus firstly on how Willy's retreat into the past serves as a form of escape for him, and secondly it will try to explain how this functions as a way for Willy to cope with the reality of his failed ambitions Reality can be a somewhat uncompromising fellow. He does not permit the use of a 'rose-tinted' view of events. Nor does he allow for aspects to be misinterpreted. Rather, he serves up an awareness of how things really are, regardless of how painful or difficult to accept they may be. ...read more.

Willy, although clearly demeaned by having to practically beg for another chance from Howard; "God Knows, Howard, I never asked a favour of any man. But I was in the firm when your father used to carry you in here in his arms." (Act two, p62), he still manages to feel a sense of almost fond familiarity towards him, misbelieving perhaps the young man's apparent lack of compassion. When Willy discovers that no amount of pleading with Howard is going to make any difference, he once again makes his retreat into the past, where here, life is looking more optimistic. He is once again transported back to his youth where his brother Ben is offering him the chance of a lifetime; "Now look here, William. I've bought timberland in Alaska and I need a man to look after things for me." (Act two, p66). It seems that each time reality strikes Willy with yet another blow; the past is ready to welcome him with open arms to comfort him. His final retreat into the past comes further on in Act two when he is feeling terribly desperate. He has to go home to face Linda to tell her he no longer has a job and he has had to borrow more money from Charley so that he can pay his insurance. ...read more.

It can produce negative, unsavory, feelings of degradation and humiliation. Coupled with this genetically based desire to succeed is the fact that Willy lived in the knowledge that his brother Ben had been very successful, this in effect, doubling the pressure on him to succeed. When one considers the obvious pressure Willy must have been under, it is understandable why he felt he could not cope with the situation. The most tragic aspect of this play however, must be Willy's inability to acknowledge where his real failure lies. In truth, Willy has in fact succeeded in his life only he cannot see it. What he has failed to do however is to realise that although he may not have been successful materialistically, he can live happily in the knowledge that he has done everything within his power to provide for his family. He also fails to acknowledge the things he should be thankful for. He not only has a devoted and loving wife, but two strong, healthy sons. Willy's mistake is not uncommon. The 'American Dream' seems to have replaced the importance of the old traditional values such as love, friendship, health and happiness. Such values these days seem to come second place to a nice house with an equally nice car. Although Willy may be forgiven for being caught up in the American dream, it is sad to think that society's influence on placing such great significance on material items has driven such individuals as Willy to the brink of despair. ...read more.