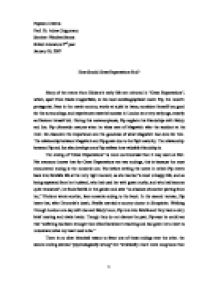 How Should Great Expectations End?

Popescu Cristina Prof. Dr. Adina Ciugureanu Seminar: Nicoleta Stanca British Literature 2nd year January 16, 2007 How Should Great Expectations End? Many of the events from Dickens's early life are mirrored in "Great Expectations", which, apart from David Copperfield, is his most autobiographical novel. Pip, the novel's protagonist, lives in the marsh country, works at a job he hates, considers himself too good for his surroundings, and experiences material success in London at a very early age, exactly as Dickens himself did. During this metamorphosis, Pip neglects his friendships with Biddy and Joe. Pip ultimately matures when he takes care of Magwitch after the accident at the river. He discovers the importance and the goodness of what Magwitch had done for him. The relationship between Magwitch and Pip grows due to the Pip's maturity. The relationship between Pip and Joe also develops once Pip realizes how valuable friendship is. The ending of "Great Expectations" is more controversial than it may seem at first. ...read more.

The romantic ending reinforce the idea that Victorianism had a great influence uppon the writers. The melodrama, in which in the end the victim is rescued, is used in "Great Expectations", one of the narative strategies, typical to the Victorian Age. Professor Laurence Tribe and Michael Dorf have written that Bulwyer-Lytton convinced Dickens to change the ending of "Great Expectations." According to them, Dickens originally planned to have Pip's love for Estrella remain unrequited. On Bulwer-Lytton's advice, "Dickens changed the ending, uniting the hero and his love". Some critics have felt that the original ending of Great Expectations is more true to the tone of the novel, that the process of Pip's redemption as a character is exactly the process that would make his continued love for Estella impossible. Others have felt that the original ending is too harsh, that their common past has destined Pip and Estella for one another, and that the main story of the novel is the story of their mutual development toward the conditions in which their love can be realized. ...read more.

as I could, and I have no doubt the story will be more acceptable through the alteration" and "Upon the whole I think it is for the better." The second ending has generally been published from Dickens's time to our own, so that it is the one which most readers know. Its good to have a novel with two endings because you can choose the one you prefer. I think that it depends on the reader's personality, if he/she is pesimistic or optimistic. Biblography Ciugureanu, Adina Victorian Selves (A Study in the Literature of th Victorian Age) pp.44-45, 47 Constanta: Ovidius University Press. Galea, Ileana Victorianism & Literature pp. 65-67, 71, 78-79 Cluj-Napoca: Dacia, 1996. Meckier, Jerome Charles Dickens's 'Great Expectations': a defense of the second ending. Roland, Carter The Penguin Guide to English Literature: Britain and Ireland pp. 145-149 London: Penguin Schad, John Dickens Refiurated. Bodies, Desires and Other Histories, Manchester: Manchester University Press, 1996. http://www.victorianweb.org/authors/dickens/ge/ripple17.html http://www.bellmore-merrick.k12.ny.us/greatex.html 1 Jerome Meckier, "Charles Dickens 's 'Great Expectations': a defense of the second ending". ?? ?? ?? ?? 1 ...read more.