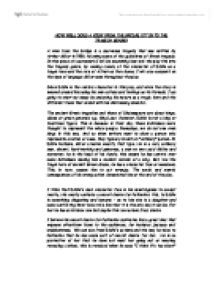 HOW WELL DOES A VIEW FROM THE BRIDGE FIT INTO THE TRAGEDY GENRE?

HOW WELL DOES A VIEW FROM THE BRIDGE FIT INTO THE TRAGEDY GENRE? A view from the bridge is a marvelous tragedy that was written by Arthur Miller in 1956 following some of the guidelines of Greek tragedy. In this piece of coursework I will be examining how well the play fits into the tragedy genre, by looking closely at the character of Eddie as a tragic hero and the role of Alfieri as the chorus. I will also comment on the type of language Miller uses throughout the play. Since Eddie is the central character in this play, and while the story is weaved around him using his own actions and feelings as its threads; I am going to start my essay by analysing his nature as a tragic hero and the different flaws that ended with his distressing downfall. The ancient Greek tragedies and those of Shakespeare are about kings, dukes or great generals e.g. King Lear. However, Eddie is not a king or illustrious figure. This is because in their day, these individuals were thought to represent the whole people. Nowadays, we do not see even kings in this way. And so when writers want to show a person who represents a nation or class, they typically invent an "ordinary" person. In Eddie Carbone, Miller creates exactly that type. He is a very ordinary man, decent, hard-working and generous, a man no one could dislike and moreover, he is the head of his family; this means he has control over some individuals making him a modern version of a king. But, like the tragic hero of ancient Greek drama, he has a character flaw or weakness. This, in turn, causes him to act wrongly. The social and mental consequences of his wrong action devastated him at the end of the play. I think that Eddie's main character flaw is his unwillingness to accept reality. ...read more.

But Eddie does not like it and so, like a fool, does not take it. Alfieri does not force Eddie to take the advice but strongly recommends him to: "This is my last word Eddie, take it or not, that's your business. Morally and legally you have no right, you cannot stop it; she is a free agent." This was a turning point in Eddie's fate. Eddie should have taken the advice and just let Catherine and Rodolfo get on with their lives, but Eddie was a fool and did not want to believe that he was going to lose Catherine. In his misery he betrays them to the immigration bureau. This is Eddie's point of no return, which is a fundamental point in a tragic hero's course through his/her troubled life. In doing this he has also betrayed a neighbour's cousins as well as Marco who is trying to make money to save his family. Not only has he betrayed his family he has betrayed himself and his word of honour, which means so much in the Italian culture, and to Eddie himself. Eddie's own words were," You can quicker get back a million dollars that was stole than a word you gave away." Eddie has betrayed his own beliefs, and lost the respect of the whole community and his honour. The community have turned against Eddie, who ignored Alfieri's words of warning, "You won't have a friend in the world, Eddie! Even those who understand will turn against you," Marco publicly denounces Eddie as a murderer, because Eddie has denied him the possibility to work in America to provide money for his starving family's desperate needs. It is Marco that is his enemy now, not Rodolfo, because Marco has taken Eddie's name and honour. It is Marco's belief that he has the right to take revenge and it is his duty to do so for the sake of his family. ...read more.

Again as Eddie plans the betrayal of the two brothers, Alfieri reads his mind and repeatedly warns him: "You won't have a friend in the world...Put it out of your mind". And by examining Alfieri's language throughout the play, we find out that he is a properly educated, fluent speaker of American English; for this reason he can explain Eddie's actions to us, but not to Eddie, who does not really speak his language. Consequently, he will be set apart from the other characters. We also realize that Alfieri repeats himself throughout the play trying to persuade Eddie against his action, which will lead to his tragic downfall. By doing so he reinforces the theme of repetition. However, Alfieri is powerless to change the inevitable course of Eddie's tragic end. He moreover emphasizes Eddie's tragic flaw "His eyes were like tunnels," Overall, I think that this is exactly what Arthur Miller wanted the play to be "a modern version of a Greek tragedy"; in order to achieve his aim, Miller slightly modernised some of the Greek tragedy rules. First of all he made Eddie an ordinary man instead of a king or an illustrious person. I think he did so because an ordinary man will relate more to the audiences, and they will also feel more sympathy towards him. Secondly, Miller permitted the character of Alfiari to take part in the story, not only by narrating but also playing the role of a lawyer. However, this role did not allow him to interferer with the way the play is going, but it was limited on giving advice only. After all I think that A view from the bridge fits very well in the tragedy genre, even though there are some modern touches. However, these touches did not by any mean totally change the play tragic type. As Eddie being an ordinary man did not change the fact that he had some character flaws that led to his tragic downfall. Again Alfiari being a lawyer in the play as well as a narrator did not lose Eddie his tragic track throughout the play. ...read more.