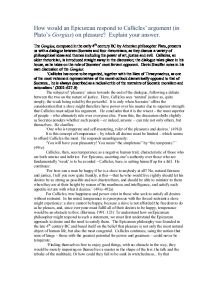 How would an Epicurean respond to Callicles argument (in Platos Gorgias) on pleasure?

How would an Epicurean respond to Callicles' argument (in Plato's Gorgias) on pleasure? Explain your answer. The Gorgias, composed in the early 4th century BC by Athenian philosopher Plato, presents us with a dialogue between Socrates and four rhetoricians, as they discuss a variety of philosophical ideas and themes including the power of art, justice and evil. Callicles, an older rhetorician, is introduced straight away in the discussion; the dialogue takes place in his house, as he takes on the role of Socrates' most fervent opponent. Devin Stauffer notes in his own discussion of the Gorgias: 'Callicles has come to be regarded, together with the likes of Thrasymachus, as one of the most vehement representatives of the moral outlook diametrically opposed to that of Socrates... he is always described as a radical critic of the restraints of Socratic moralism and rationalism.' (2002: 627-8) The subject of 'pleasure' arises towards the end of the dialogue, following a debate between the two on the nature of justice. Here, Callicles sees 'natural' justice as, quite simply, the weak being ruled by the powerful. It is only when Socrates' offers the consideration that a slave might therefore have power over his master due to superior strength that Callicles must adjust his argument. He concludes that it is the wisest - the most superior of people - who ultimately rule over everyone else. From this, the discussion shifts slightly as Socrates ponders whether such people - or indeed, anyone - can rule not only others, but themselves. He clarifies: 'One who is temperate and self-mastering, ruler of the pleasures and desires.' (491d) It is this concept of temperance - by which all desires must be limited - which seems to offend Callicles the most. He responds unambiguously: 'You will have your pleasantry! You mean "the simpletons" by "the temperate."' (491e) Callicles, then, sees temperance as a negative human trait, characteristic of those who are both unwise and inferior. ...read more.

This mindset poses a striking contradiction to the notion of the Epicurean ataraxia - it would be fair to suggest that an Epicurean would say Callicles leaves little room for tranquillity or peace of mind. We might look to a passage from Lucretius, a Roman poet living in the 1st Century AD, to highlight this. 'In how great perils, in what darks of life, Are spent in human years, however brief! O not to see that nature for herself Barks after nothing, save that pain keep off, Disjoined from the body, and that mind enjoy Delightsome feeling, far from care and fear! Therefore we see that our corporeal life Needs little, altogether, and only such As takes the pain away, and can besides Strew underneath some number of delights. (On the Nature of Things, 2.19-28) Lucretius - like many Epicureans before him - argues here that true pleasure might be found, quite simply, in the absence of pain; one need not seek out more pleasures when the body and soul are content. It is these sentiments which are found in Epicurus Letters to Menoeoceus 127, as Epicurus makes a point of differentiating those desires which are 'groundless' to those which are not. From Callicles' blunt observation that those without desires cannot be happy, and therefore, those with the greatest desires receive the greatest levels of happiness, Socrates offers a series of propositions (493b-494b). He first puts forward the image of a leaky cask as a metaphor for the souls of those who seek out excessive pleasure: those who are never satisfied with the pleasure they receive must surely be the most miserable and ignorant of men, and lacking virtue. When Callicles dismisses this, Socrates provides a second image: the man with the leaky cask must surely suffer when constantly striving to refill it. Callicles responds with a typically contrary answer: '...that man who has taken his fill can have no pleasure anymore; in fact it is what I just now called living like a stone, when one has filled up and no longer feels any joy or pain.' ...read more.

Furthermore, he cannot deny that some pleasures are not beneficial when going to the wrong types of people. Seth Benardete tells us, 'The surgical separation of pleasant from good, which has cut out as well the political virtues of prudence and courage, leaves Callicles squirming before Socrates' threat to cauterise the now-helpless desires... it allows them to be put back together in such a way that no degree of pain if good would stand in the way of its being choice worthy, and likewise no degree of pleasure no matter how little evil it might contain would require its acceptance.' (1991: 82) Socrates' constant rebuttal of Callicles' excessive form of hedonism is significant. A large proportion of his argument is spent attempting to dissuade Callicles from his theories of intemperance; indeed, it takes up over half of the dialogue in a wide range of discouraging arguments and analogies. (Tarnopolsky, 2010: 79) If Socrates accuses Callicles of possessing a 'leaky' soul, with Callicles response being that Socrates' must surely be no happier than a corpse, we might suggest that were an Epicurean introduced into the discussion, he might take a stance which sits somewhere between the two. Certainly, Epicureans had in antiquity made a name for themselves as unashamed hedonists, a stance which Callicles also takes, and yet, it is the Calliclean notion that 'happiness' is defined by our pursuit of pleasures which sets the biggest divide between his form of hedonism, and that of any Epicurean counterpart. And so Socrates, in his constant attempt to prove that not all desires should be satisfied, forces Callicles to backtrack his initial argument and conclude that, whilst some desires are good - such food when it provides physical strength - others cause harm and are to be avoided. Pleasure, then, should be pursued for the sake of the 'good', not simply for the sake of pleasure. This final notion is more in line with the Epicurean system of beliefs: by all means seek out pleasure, but only those which can be deemed both 'good' and virtuous. ...read more.