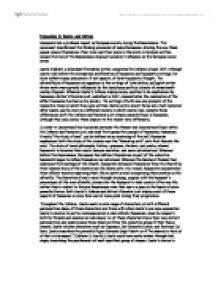 Humanism in Dante and Milton Humanism had a profound impact on European society during the Renaissance. This movement transformed the thinking processes of many Europeans, altering the way these people viewed themselves, their lives, and their place in the world. Literature written around the time of the Renaissance displays humanism's influence on the European social order. Dante Alighieri, a prominent Florentine writer, completed his Inferno around 1314. Although Dante lived before the widespread proliferation of humanism and humanistic writings, his style exhibits many precursors, if not aspects, of later humanistic thought. The aftereffects of humanism are apparent in the writings of John Milton, an English writer whose works were greatly influenced by the tumultuous political climate of seventeenth century England. Whereas Dante's Inferno displays many qualities to be emphasized by humanism, Milton's Paradise Lost, published in 1667, demonstrates the culmination of the effect humanism has had on his society. The writings of both men are products of the respective times in which they were written; Milton wrote almost three and a half centuries after Dante, and he lived in a different society in which Dante lived. Despite these differences, both the Inferno and Paradise Lost display aspects found in humanism, although they may convey these aspects to the reader very differently. In order to understand how humanism pervades the themes and descriptions found within the Inferno and Paradise Lost, one must first grasp the concept of humanism. ...read more.

Dante briefly and concisely fleshes his characters out, while Milton illustrates his characters with great detail, paying close attention to their particular traits and attributes which identify them as individuals. Milton identifies many of the main characters as part of one singular group, the fallen angels, similar to the way Dante identifies the individual sinners he meets with their respective sins. However, Milton places a much greater emphasis on the individual, and how each individual character differs. The use of contrast to individualize characters is most easily recognized during the speeches of Moloch and Belial in Book II of Paradise Lost. Moloch appears extremely rash and reckless, advocating for open war against Heaven. Immediately following Moloch's speech, Belial tries to persuade the fallen angels not to recommence the war with Heaven. Moloch's speech is rather short and filled with emotion; Belial's speech is long, calm, devious, and persuasive. The speeches of these characters offer the reader a very detailed view of these two individual characters. Milton's juxtaposition of these completely different characters further identifies each of them as individuals, rather than as members of the fallen angel collective. Although both the Inferno and Paradise Lost display humanism in the form of individualism, each work is a product of the period in which it was produced. Milton's Paradise Lost was written during the Baroque period, a movement of extremes, so Milton fleshes out his characters with great, almost extreme detail. ...read more.

However, it should be noted that even though the characters in Paradise Lost may not be of a Classical origin, the individualism that these characters display reflects the effect humanism has had on Milton. Strangely enough, both the Inferno and Paradise Lost were not written in Latin. If these two compositions were written in Latin, this overt mimicry of the Classical epic would ooze humanism. However, both works were written in the vernacular. This can be explained by the fact that the Inferno was written just prior to the humanistic movement, and that Paradise Lost was written during the Baroque period, considerably after the high-tide of the humanistic movement. If both works had been written during the middle of the fifteenth century, at the pinnacle of humanism's influence, they may well have been written in Latin. Both Dante's Inferno and Milton's Paradise Lost exhibit many aspects of humanism. The most recognizable of these aspects include the emphasis Dante and Milton give to selected individuals, rather than to a collective group. Throughout the Inferno, Dante briefly isolates several characters, giving them individual traits and attributes. Throughout Books I and II of Paradise Lost, Milton fleshes out in great detail a small number of characters. Milton individualizes and describes characters in greater detail than Dante because Milton writes much later than Dante, and humanism has had over two hundred years to pervade Milton's society. Whereas Dante's Inferno anticipates humanism, Milton's Paradise Lost displays the effect humanism has had on European culture. ...read more.