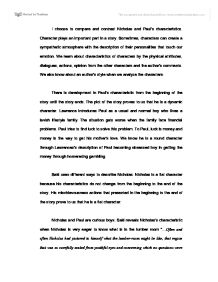 I choose to compare and contrast Nicholas and Paul's characteristics.

I choose to compare and contrast Nicholas and Paul's characteristics. Character plays an important part in a story. Sometimes, characters can create a sympathetic atmosphere with the description of their personalities that touch our emotion. We learn about characteristics of characters by the physical attributes, dialogues, actions, opinion from the other characters and the author's comments. We also know about an author's style when we analyze the characters. There is development in Paul's characteristic from the beginning of the story until the story ends. The plot of the story proves to us that he is a dynamic character. Lawrence introduces Paul as a usual and normal boy who lives a lavish lifestyle family. The situation gets worse when the family face financial problems. Paul tries to find luck to solve this problem. To Paul, luck is money and money is the way to get his mother's love. We know he is a round character through Lawrences's description of Paul becoming obsessed boy in getting the money through horseracing gambling. Saki uses different ways to describe Nicholas. Nicholas is a flat character because his characteristics do not change from the beginning to the end of the story. His mischievousness actions that presented in the beginning to the end of the story prove to us that he is a flat character. ...read more.

".. He had a secret within a secret, something he had not divulged, even to Bassett or to his Uncle Oscar... Paul's secret of secrets was his wooden horse, that which had no name..." Lawrence describes this trait by his commentary in the story. As for Nicholas, he planned to go into the lumber room by himself. He had plan the idea to go into the lumber room "..execution a plan of action that had long germinated in his brain...". Since he was in disgrace and his brother and cousins went to Jag borough, he carried out the actions alone. He worked carefully so that nobody would know his secret; that he had entered the lumber room. "Nicholas shut the book, restored it carefully to its place in a corner, and shook some dust from a neighboring pile of newspapers over it. Then he crept from the room, locked the door, and replaced the key exactly where he had found it." These characters have differences between them. We can see in the differences between them in their point of views to the problem in their life. Paul's characteristics develop when he changes from an insensitive to a sensitive boy when the family faces financial constrains. "...And each one saw in the eyes of the other two that they too had heard. ...read more.

At the end of the story, the table are turned and now Nicholas has the upper hand of the situation. Nicholas uses his imagination and his brilliance to get what he wants. He germinated the plan to enter into the room. "...Nicholas slipped back into the house and rapidly put into execution a plan of action that had long germinated in his brain...." He tricks his aunt into thinking that he was in the gooseberry garden. "It was clear to his aunt that he was determined to get into the gooseberry garden, "only," as she remarked to herself, "because I have told him he is not to." Compare to Nicholas, Paul is inspired by the rocking- horse to know the winning horses. "....So the child cried, trying to get up and urge the rocking-horse that gave him his inspiration. . If I ride my horse till I'm sure, then I tell you, Bassett, you can go as high as you like..." He never uses his brilliance to know the answers. This trait is influenced by Lawrence's own background. He believes more in the intuition than rationality. As a conclusion, both major characters are analyzed by their thought and point of view, authors' descriptions and the actions that they did in the stories. Both of them bring up the event to life and how their characteristics capture the readers' attention to understand the messages and themes in the stories. ...read more.