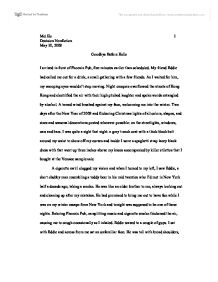 I stared at him for a second and turned away until his eyes met mine. My face grew hot red like chili peppers.

Mei Ho 1 Decision Nonfiction May 10, 2009 Goodbye Before Hello I arrived in front of Phoenix Pub, five minutes earlier than scheduled. My friend Eddie had called me out for a drink, a small gathering with a few friends. As I waited for him, my snooping eyes wouldn't stop moving. Night creepers overflowed the streets of Hong Kong and electrified the air with their high pitched laughter and spoke words entangled by alcohol. A tamed wind brushed against my face, welcoming me into the winter. Two days after the New Year of 2008 and flickering Christmas lights of all colors, shapes, and sizes and seasonal decorations posted wherever possible: on the streetlights, windows, cars and bars. I was quite a sight that night: a gray trench coat with a thick black belt around my waist to show off my curves and inside I wore a spaghetti strap lacey black dress with that went up three inches above my knees accompanied by killer stilettos that I bought at the Versace sample sale. A cigarette swirl clogged my vision and when I turned to my left, I saw Eddie, a short chubby man resembling a teddy bear in his mid twenties who I'd met in New York half a decade ago, taking a smoke. ...read more.

I glared into his eyes then I softened up. He didn't blink. I had a gut feeling that he wasn't lying. Or maybe he was a really good actor but either way I followed him into the room. Inside the closet sized room centered a queen sized bed with worn out flowered sheets and two puffed up pillows. The smell of moth balls twitched into my nostrils. What the hell kind of place was this? I took off my heels and crawled on the bed. Tommy 3 slept next to me. I had my back turned against him and he turned his against mine. The room was silent with the exception of his breathing and soft snoring. I closed my eyes and drifted into a sleep. Moments later, I was wakened by the ringing from my phone. It was my mother calling, scolding for me to get back to my cousin's house. I sat up on the bed and panicked, waking Tommy up. I was afraid of what my mom would do to me. Not let me go out again. My heart pounded against my chest, so hard that I was sure Tommy had heard it. I've never stayed out so late before. As worried as I was, a part of me wanted to stay with Tommy. ...read more.

The sound of gentle waves sang me a pleasant lullaby. The smell of fresh sea salt made my nose wiggle. I smiled as we spoke about our future together and he promised he'll wait for me until I graduate from college. I looked deep into his eyes and saw myself. My vacation was over. Tommy held my one of my hands as he strolled my luggage with the other. The sun shone though the glass windows of the airport. It was the perfect weather for some outdoor activity, not too hot or too cold. The loudspeaker had on going announcements. Stewardesses clicked elegantly with the heel of their shoes. We stood in the "Economy Class to New York" line to check in my bags. A heavy lump formed in my throat, my nose was running and tears drowned my eyes. My makeup smeared. I turned away, trying to conceal myself but Tommy already saw. He pulled me close and told me, "No matter how far apart we are, what we're doing, or who we're with, you'll never be alone, because I'll always be inside of your heart and you'll be inside of mine." There was a spark in his eyes. I waved goodbye one last time and walked into the 5 gate. I touched my hand; it was the same hand that he was holding just a minute ago. Turned to look at him as he walked away and got smaller and smaller. # # # ...read more.