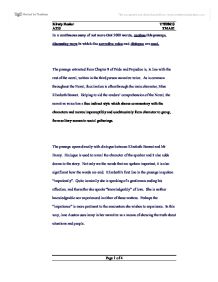 In a continuous essay of not more that 1000 words, analyse this passage, discussing ways in which the narrative voice and dialogue are used.

In a continuous essay of not more that 1000 words, analyse this passage, discussing ways in which the narrative voice and dialogue are used. The passage extracted from Chapter 9 of Pride and Prejudice is, in line with the rest of the novel, written in the third person narrative voice. As is common throughout the Novel, focalization is often through the main character, Miss Elizabeth Bennet. Helping to aid the readers' comprehension of the Novel, the narrative voice has a free indirect style which shares commentary with the characters and moves imperceptibly and unobtrusively from character to group, from solitary scenes to social gatherings. The passage opens directly with dialogue between Elizabeth Bennet and Mr Darcy. Dialogue is used to reveal the character of the speaker and it also adds drama to the story. Not only are the words that are spoken important, it is also significant how the words are said. Elizabeth's first line in the passage is spoken "impatiently". Quite ironically she is speaking of a gentleman ending his affection, and thereafter she speaks "knowledgeably" of love. ...read more.

An awkward silence followed - awkward only from Elizabeth's point of view less she be embarrassed by her mother. Elizabeth's fear of her mother "exposing herself" shows the extent of her shame and distress. Although this scene is largely seen from the viewpoint of Elizabeth, we view the narrator as omniscient as little ironies are revealed about Elizabeth herself. For example, Elizabeth thinks Mr Darcy and the Bingley sisters rude due to the prejudices they hold against the Bennet's for being of a lower social-standing. Yet Elizabeth herself is embarrassed "lest her mother should be exposing herself again". Although Elizabeth is a thinking character and can laugh at the ridiculousness of unthinking characters, the author is able to turn the tables on her heroine once in a while, demonstrating the fact that Elizabeth is not a creature of pure reason and perfection. The brief silence which made Elizabeth so uncomfortable was not a neutral one, we know it affected Elizabeth through phrases such as "Elizabeth trembled" and "She longed to speak". Indirect speech follows with Mrs Bennet repeating her thanks to Mr Bingley. ...read more.

The character is revealed to us mainly by the art of telling. This may be slightly patronizing as the reader is not allowed to make up his/her own mind in conclusion of the character, but the technique is beneficial in respect of brevity and clarity. From the narration, I surmise Lydia to be very outspoken and head strong. From the indirect speech that follows, when Lydia "orders" Mr Bingley to present a Ball at Netherfield, my interpretation of Lydia's characterization is reinforced. Through Lydia's dialogue regarding the second ball "I shall tell Colonel Forster it will be quite a shame if he does not". Again, my opinions are reinforced. The showing of the character has allowed me to reiterate that Lydia is thoroughly selfish and she uses people so that she may get what she wishes. She shows no gratitude toward Mr Bingley for his acquiesce to hold the ball. Thus, this passage displays many of the narrative techniques which Austen uses in the novel as a whole, and reveals her level of skill in being able to express her ideas through the narrative while still remaining entertaining and readable. ...read more.