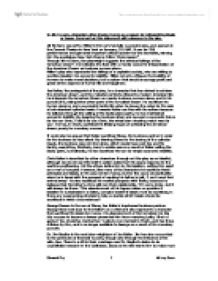 In All my sons, characters often invoke money as a reason for relinquishing ideals or hopes. Comment

In All my sons, characters often invoke money as a reason for relinquishing ideals or hopes. Comment on this statement with reference to the play. All My Sons was Arthur Miller's first commercially successful play, and opened at the Coronet Theatre in New York on January, 29 1947. It ran for 328 performances and garnered important critical acclaim for the dramatist, winning him the prestigious New York Drama Critics' Circle Award." Through All my Sons, the playwright suggests the ethnical failings of the 'American dream'. He indicates the flaw with a merely economic interpretation of the American Dream as business success alone. Miller's play also represents the failings of a capitalist society, who are willing to sacrifice idealism for economic stability. Miller not only critiques the inability of humans to make moral decisions, but a system that would encourage profit and greed at the expense of human life and happiness. ...read more.

By blaming Steve for the issuing of the cylinder heads, the business was not shut down, which would have cost Joe and his family, everything. Similarly, Larry's suicide was as a result of Keller selling the faulty parts, so indirectly, he has sacrificed his son for simple economic stability. Chris Keller is described by other characters through out the play as an idealist, although we do not see this trait in action aside from his angry response to the wartime profiteering. Yet the others define him by his idealism, setting him apart as a man of scruples. However, like many of the characters he sacrifices these principles and ideals, in his case not for money, but for the cause of practicality when he is faced with the prospect of sending his father to jail, 'I can't send that animal away'. He also sacrifices his marital prospects with Annie, because he believes that his father's crime will ruin their relationship, 'I'm sorry Annie...but it will always be there.' ...read more.

Bayliss's desire to do unprofitable research in the Caribbean, because his wife wants him to make more money instead of do what he enjoys and what will help others. 'Research pays twenty-five dollars a week minus laundering the hair shirt. You've got to give up your life to go into it.' This further illustrates the attitude towards money that Miller's characters possess. In conclusion, Miller's depiction of modern day America demonstrates his belief that people no longer understand the obligation to society as a whole. The American dream has become a pursuit of material prosperity, and the inability of people to sacrifice monetary success to follow their dreams is as a result of a society which encourages selfishness. Miller utilizes Keller as the medium to represent the sector of working class citizens set on financial accomplishment. However, Keller's sacrifice at the end of the play might symbolise Miller's determination to believe that society as a whole can re-evaluate our principles, and understand there are more important things than money. Edward Fry 808 words ?? ?? ?? ?? I Edward Fry All my Sons ...read more.