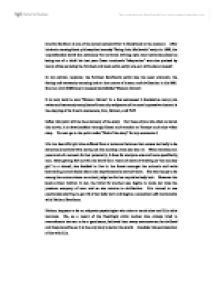 In my opinion, however, the funniest Kaufman's script was his least unknown, the daring and extremely amusing look at the nature of human and civilization in his 2001 (but not until 2002 was it released worldwide) &quot;Human Nature&quot;.

Charlie Kaufman is one of the hottest screenwriter in Hollywood at the moment. After his brain-teasing black philosophical comedy "Being John Malkovich" script in 1999, his unpredictably weird but extremely fun-to-watch writing style was institutionalized as being one of a kind; his last year Oscar nominee's "Adaptation" was also praised by many critics as being the funniest and most satire script one can write about oneself. In my opinion, however, the funniest Kaufman's script was his least unknown, the daring and extremely amusing look at the nature of human and civilization in his 2001 (but not until 2002 was it released worldwide) "Human Nature". It is very hard to sum "Human Nature" in a few sentences; it blended so many plot twists and extremely complicated humanity subjects and its most impressive element is the shaping of its 3 main characters, Lila, Nathan, and Puff. (After this point will be the summary of the story. For those of you who wish to watch this movie, it is downloadable through Kazaa and rentable at Tsutaya and other video shop. You can go to the point under "End of the story" for my comments.) Lila is a beautiful girl who suffered from a hormonal balance that causes her body to be abnormally covered with hairs, just like monkey, since she was 12. While this does not pose much of a concern for her personally, it does for everyone else and more specifically, men. After getting fed up with the world (as a result of years of working as 'the monkey girl' in a circus), she decided to live in the forest amongst the animals and write best-selling nature books about the experiences she earned there. ...read more.

Puff, having fully trained to be an English gentleman, found it hard to control his sexual desire and be a gentleman. In a very amusing scene, Nathan put Puff in front of the slide of porn, trying to train Puff to control himself from not running into the picture of the naked women and masturbate. It took numerous electric shocks before Puff could constrain himself. However, the results proved to be a failure as the first thing Puff did after he got his freedom was to buy the motivation of all his efforts, sex, from a prostitute. Even though he is, in the surface, a full gentleman traveling with his teacher, Nathan, around the US as a result of Nathan's accurate assumption that civilization is the way for happiness, Puff was not happy. His only happy moment was when he sneaked from Nathan to have sex; he started to miss the wilderness and the nature. Just like Lila heard Puff's request, she came back with a truly hairless and sexy body, as a result of extreme electrolysis course and workout, this time not to have Nathan back but to revenge him. She broke in the lab with a gun and stole Puff from Nathan saying, "I am going to retrain him to be an ape in order to prove that your civilization sucks. He will be better and happier with fresh air, freedom, and most of all, free of human's eyes to judge him. Fuck humanity! ". And she did what she said. She used the very same method, electronic shock every time Puff speak human's word or act like human, to get back his memory as an ape. ...read more.

comfort from science, and sophistication from civilization, over the chance of being with nature, even though he knew in his heart that he used to long for nature when he was in human society. I believe that, even "Human Nature" is just a movie, it did provide a good portrait of the drive behind human's choices. And also that it is in vain to find the answer towards the question of whether what science brought us is worthy for what we lost. Science brought us comfort under the cost of nature's destruction. We live under numerous self-produced rule in order not to be alone. We produced rules to prohibit our basic needs, and judge those who violate these rules to follow their natural needs as uncivilized. We told ourselves to judge people from their heart, but even those we deem smartest cannot stop their natural sex drive from judging people based on outlook. In the end, the only way for human to be happy is not to seek for the extreme, but to except things as it is. If the insatiability in human nature can be rid, as every religion preaches us too, we can find peace no matter where we are. The possibility of getting rid of this nature, however, seems to be low in this world of science, technology, civilization, and blooming capitalism, as we are taught that to be successful, we have to pursue our needs aggressively. However, Miyazaki's animations seem to try to answer the question of how to live happily in the right balance between technology development and nature. I will try to cover some of the interesting ideas from his work next week, if possible. " ...read more.