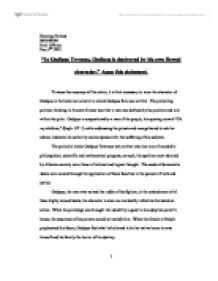 &quot;In Oedipus Tyranus, Oedipus is destroyed by his own flawed character.&quot; Asses this statement.

Henning Fotland B00339586 Prof. O'Brien Dec. 9th 2002 "In Oedipus Tyranus, Oedipus is destroyed by his own flawed character." Asses this statement. To asses the accuracy of this claim, it is first necessary to view the character of Oedipus in the historical context in which Oedipus Rex was written. The prevailing political thinking in Ancient Greece was that a man was defined by his position and role within the polis. Oedipus is unquestionably a man of the people, his opening remark "Oh my children," (Soph. OT. 1) while addressing the priests and men gathered to ask his advice, indicates his authority and compassion for the suffering of his subjects. The period in which Oedipus Tyrannus was written was also one of incredible philosophical, scientific and mathematical progress, as such, the qualities most admired by Athenian society were those of rational and logical thought. The seeds of democratic ideals were sowed through the application of these faculties in the pursuit of truth and justice. Oedipus, the man who solved the riddle of the Sphinx, is the embodiment of all these highly valued ideals, his character is also one marked by reflective but decisive action. ...read more.

to reveal the terrible truth to Oedipus reveals a consistent and passionate desire for truth which does not deserve the title of mere flaw. Subsequently, to argue that Oedipus' flaw was inborn and that he was a victim of his own unchangeable destiny seems to undermine a basic tenant of tragedy. The nature of Sophocles' interpretation of the Oedipus myth necessitates that Oedipus be free to discover his nature and to precipitate his own downfall. Oedipus' rational faculties and his unrelenting search for the truth about himself reach their height at the point he realizes that he has neglected his own nature. His undeniably admirable desire to alleviate the suffering of his people must come at the expense of himself as his denunciation of the murderer of Liaus indicates: "...if by any chance he proves to be an intimate of our house, here at my hearth, with my full knowledge, may the curse I just called down on him strike me!" (Soph. OT. 284-87) Although he unknowingly denounces himself, it is his commitment to stand by his decree which makes him a hero of tragic circumstance; "Drive me out of the land at once, far from sight, where I can never hear a human voice." (Soph. ...read more.

the basis of numerous contemporary playwrights, that Sophocles would only have chosen Oedipus a second time to develop what he had already created. In conclusion, I would argue that Oedipus was a representation of infallible moral and ethical stature, whose capabilities and commitment to the ideals of the time presented an argument common in Sophoclean literature; "no towering form of greatness enters into the lives of mortals free and clear of ruin." (Soph. Ant. 687-89) I do not agree that this principle requires an inherent flaw or that any of Oedipus' qualities could be faulted. I believe Sophocles argued that a balance between public and private or rational and spiritual personas must exist and that any excellence in one field will be to the detriment of the other. While this may be a fact of Sophoclean characters, I do not recognize that it requires a valuation of merit or flaw in those characters. Finally, I believe that Oedipus was not destroyed but enlightened by his self-discovery and that the catharsis he endured as a consequence of his actions made him a more powerful and complete character in Sophocles' subsequent treatment of him. His situation was tragic, but his adaptation and reaction to this situation was heroic. ...read more.