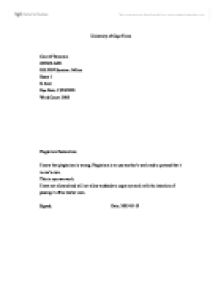 In order to be able to discover the relevance Milton and Paradise Lost still have today in a post-modernist society, I believe that it is imperative to first be able to understand and appreciate Milton in the context and times in which this epic, Paradise

University of Cape Town Clare O'Donovan ODNCLA001 ELL305F Seminar: Milton Essay 1 K. Sole Due Date: 17/05/2005 Word Count: 2000 Plagiarism Declaration: I know that plagiarism is wrong. Plagiarism is to use another's work and to pretend that it is one's own. This is my own work. I have not allowed and will not allow anybody to copy my work with the intention of passing it off as his/her own. Signed: Date: 2005-05-13 In order to be able to discover the relevance Milton and Paradise Lost still have today in a post-modernist society, I believe that it is imperative to first be able to understand and appreciate Milton in the context and times in which this epic, Paradise Lost was written. This essay will aim to uncover some of the most important and prevalent themes found in Paradise Lost, and to explain how and why these themes remain so relevant in a society which is so far removed from the era Paradise Lost was written in. Some of the themes I will be discussing deal with important issues such as gender and colonialism. The issue of colonialism, which Milton deals with at great length, is very interesting in relation to the current times. Evans (1996) brings to the reader's attention that during the time that Paradise Lost was written, the colonisation of America was well under way and publicized to the masses. ...read more.

to continue in the way they have been. Thus as previously mentioned, Milton, according to Achinstein (1999) "supported the colonisation of Ireland as he deemed the Irish as irredeemably barbaric, therefore undeserving of human rights." (p.70). Another very interesting and I believe important theme which Milton deals with is the theme of individuality and free-will. These themes are central to Paradise Lost and are reiterated time and time again by Milton. This move toward individual characterization is common of in the modern epic, and is still common of style today. The theme of individuality is made clear to the reader in the way that Milton characterises and gives personalities to characters in the poem. The most obvious example of this can be seen in the character of Satan. Milner (1981) brings to our attention the "obvious character development and structure of individual personality in Satan." Brought to our attention is the interesting idea that the Council in Hell in Book 2 "is a real debate between real individuals; Moloch, Belial, Mammon and Beelzebub are living personalities." (p. 153) Together with Milton's idea of hierarchy the reader becomes aware of the makings of capitalism, an ideal which is the cornerstone of today's Western society. I say this because as Milner (1981) points out "Milton believed in a meritocratic hierarchy of achieved, rather than ascribed, statuses." ...read more.

"Milton argued that the grounds for divorce should be extended to include non-physical disabilities." (p.16) Although Milton was ahead of time, particularly seen as he promotes divorce, he was, as Woods (1988) points out "locked into his culture's assumptions of women's inferior position" (p.16). This is relative to today's society as we also are the victims of cultural norms and expectations. Although in Western society women take a more active role in society and not only in the family, there are still certain stereotypes and cultural expectations which we often are not aware of. Such cultural norms take place in such things as in home cleaning or appliance advertisements they are almost always characterised by a woman. This shows us that although women are more accepted into society, their main role is still as the home-maker. Corum (1988) makes the connection between Eve being a "colonial territory," he goes on to say that "woman only becomes valuable when she is transformed into an ideal space for the imperial male, whether for procreation, caring, support or profit for him as a father, monarch or deity."(p.123). This I believe is relevant to us today, as often woman are merely seen as something to conquer and own. Women are viewed as objects in many cases and not individuals. This is apparent in the sense of 'trophy wives'. One of the interesting ways in which Milton characterises Eve is the way in which Milton deals with the issues of knowledge and education. ...read more.