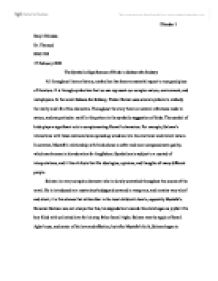 In Salman the Solitary, Yashar Kemal uses several symbols to embody the reality and life of his characters. Throughout the story there are several references made to nature, and one particular motif in this pattern is the symbolic suggestion of birds.

Ranjit Dhindsa Dr. Tharaud ENG 220 17 February 2003 The Symbolic Significance of Birds in Salman the Solitary All throughout literary history, symbolism has been an essential aspect to any good piece of literature. It is through symbolism that we can represent our complex nature, environment, and metaphysics. In the novel Salman the Solitary, Yashar Kemal uses several symbols to embody the reality and life of his characters. Throughout the story there are several references made to nature, and one particular motif in this pattern is the symbolic suggestion of birds. The symbol of birds plays a significant role in complementing Kemal's characters. For example, Salman's interactions with these creatures have opened up windows into his emotional and violent nature. In contrast, Mustafa's relationship with birds shows a softer and more compassionate quality, which can be seen in his adoration for kingfishers. Symbolism is subject to a myriad of interpretations, and it this attribute that fits ideologies, opinions, and thoughts of many different people. Salman is a very complex character who is slowly unraveled throughout the course of the novel. He is introduced as a mysterious bodyguard covered in weaponry, and remains very aloof and silent; it is this silence that strikes fear in the local children's hearts, especially Mustafa's. ...read more.

Soon he also tried to abandon this partridge which he had loved, and would constantly have dreams of its death to a large serpent. His dreams began to become more abstract, and one envisioned Mustafa as the partridge being devoured. In this dream Salman struggles to save Mustafa, but the snake is too powerful, and swallows him whole. The snake seemed to have symbolized neglect and the partridge must have represented the innocence of a child. His attempt to save him from neglect fails, and he learns that it's something out of his control. After a few more unsuccessful efforts of having the partridge eaten by snake, Salman decapitates its head in one motion as he gazes at Mustafa and Ismail Agha laughing and enjoying each others company. This violent act opens a window into Salman's heart which is full of loneliness and despair, and reveals his hurt and emptiness. Kemal describes these emotions in the following quote, which states, "...to be suddenly neglected , bereft of the love and attention he had been used to, was like being cast into a vacuum (Kemal 111). Salman's sense of worthlessness becomes even more prevalent, until one day he decided to become Ismail's bodyguard. ...read more.

Kemal describes Mustafa's astonishment with kingfishers as having lived in a "blue daydream" after almost catching one (Kemal 138). These birds are used as a foil for Mustafa's character, and complement his kindness and sympathy very well. An example of which the reader may observe a contrast between him and Salman is when Salman had captured several kingfishers for Mustafa, and Mustafa released them right away. The liberation of the kingfishers symbolized both Mustafa's hate for Salman, and an insight to his principles. It's as if the cage birds were tainted after being captured by Salman who could have not had the capacity to appreciate nor admire these creatures. Symbolism is a literary device used to understand the complex aspects of our nature, environment, and reality; it is also subject to many different interpretations. Symbolism is similar to the optical illusion that depicts both an old woman and a young lady. What one sees depends upon ones perception, but neither choice is correct or incorrect. Yashar Kemal embodies several examples of symbolism in Salman the Solitary, and leaves his readers with an intimate understanding of each of the characters in his novel. We must truly attempt to appreciate good literature, for it will only open our minds to our own nature and understanding of others. ?? ?? ?? ?? Dhindsa 1 ...read more.