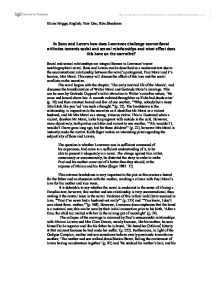 In Sons and Lovers how does Lawrence challenge conventional attitudes towards social and sexual relationships and what effect does this have on the narrative?

In Sons and Lovers how does Lawrence challenge conventional attitudes towards social and sexual relationships and what effect does this have on the narrative? Social and sexual relationships are integral themes in Lawrence's semi-autobiographical novel. Sons and Lovers can be described as a modernist text due to the unconventional relationship between the novel's protagonist, Paul Morel and it's heroine, Mrs Morel. This essay will discuss the effect of this love and the social conflicts on the narrative. The novel begins with the chapter, 'The early married life of the Morels', and discusses the transformation of Walter Morel and Gertrude Morel's marriage. This can be seen by Gertrude Coppard's initial attraction to Walter's carefree nature, 'He came and bowed above her. A warmth radiated through her as if she had drunk wine' (p. 10) and their eventual hatred and fear of one another, '"Why, nobody but a nasty little bitch like you 'ud 'ave such a thought."'(p. 22). The breakdown in the relationship, is imperative to the narrative as it identifies Mr Morel as a violent husband, and Mr Mrs Morel as a strong, virtuous victim. This is illustrated when a violent, drunken Mr Morel, locks his pregnant wife outside in the cold. ...read more.

However, the novel concludes with their reunion. Lawrence, may have decided that such a relationship should succeed as both people are equals, and are able to finally admit to their love and to their mistakes, '"Take me back!"' (p. 409). This theme of equality is illustrated by the successful (although minor) relationships of Annie Morel and Leonard, and Arthur Morel and Beatrice Wyld. The latter relationship is interesting as Arthur Morel is represented as a parallel to his father, as he is reckless, strong and happy being working class. His relationship with Beatrice Wyld is playful and equal. For instance, in a subconscious need to be accepted by 'Beat', Arthur, 'liked to lapse into dialect when he talked to her' (p. 247) and equally Beatrice 'would sometimes smoke with him' (p. 247). This downward convergence in the soldier's speech is sometimes used by Paul when talking to his male friends and flirting with Clara and Beatrice. This may be evidence of a fear of sounding too socially superior in front of his friends or a form of escapism from his and Miriam's serious conversations. The novel is also made up of certain social relationships which help to shape the narrative, into one of conflict, making Sons and Lovers a social tragedy. ...read more.

Miriam, however, treats nature as she regards Paul. She is overly devoted to such beauty as they are of God's creation, and her intense love for flowers often agitates Paul. However, the working class is sometimes referred to in a more sinister way. For example, Mr Morel spends his days in underground darkness, symbolising his rooted, disagreeable nature within the novel. In conclusion, Lawrence challenges conventional attitudes to social and sexual relationships through the character of Paul Morel. The episodic novel takes the reader on a journey of Paul's life, which is faced with a divided upbringing and thus leads to divided loyalties towards those he loves. He is unable to have conventional relationships, as these too are divided. He is torn between the smothering love of his mother, the suffocating intellectual and spiritual love of Miriam, and the shallow sensual love of Clara. The protagonist is finally free from this division with the death of his mother, and his journey into the 'phosphorescence' marks the beginning of his new life. This open ending is typical of modernist literature and together with the psychoanalytic element of the novel, and the controversy of Paul's relationship with his mother; Sons and Lovers is a modernist novel. Elaine Briggs; English; Year One; Kate Steedman ...read more.