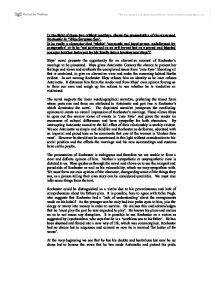 In the light of these two critical readings, discus the presentation of the unnamed Rochester in 'Wide Sargasso Sea'.

In the light of these two critical readings, discus the presentation of the unnamed Rochester in 'Wide Sargasso Sea'. Is he really a character that 'wields' 'economic and legal power, uninformed by compassion' or is he 'not portrayed as an evil tyrant but as a proud and bigoted younger brother betrayed by his family into a loveless marriage'? Rhys' novel presents the opportunity for an alternative account of Rochester's marriage to be presented. Rhys gives Antoinette Cosway the chance to present her feelings and views and confronts the unexplored issues from 'Jane Eyre' liberating all that is contained, to give an alternative view and make the reasoning behind Bertha evident. In not naming Rochester Rhys refuses him an identity as he later refuses Antoinette. It distances him from the reader and from Rhys' own opinion forcing us to form our own and weigh up his actions to see whether he is vindictive or victimised. The novel neglects the linear autobiographical narrative, preferring the trisect form where parts one and three are attributed to Antoinette and part two is Rochester's which dominates the novel. The disjointed narrative juxtaposes the conflicting opinions to create an overall impression of Rochester's marriage. These allows Rhys to open out the narrow views of events in 'Jane Eyre' and gives the reader an awareness of cultural differences and have sympathy for both characters. By interrupting Antoinette narrative the full effect of their relationship is starkly evident. We see Antoinette as simple and childlike and Rochester as deliberate, educated with an imperial and proud tone as he comments that one of the women is 'blacker than most'. However he should not be ascertained in this light without consideration to his social position and the effects the marriage and his new surroundings and customs have on his psyche. ...read more.

Rochester insists that it is Jamaica that is 'unreal and like a dream'. Jayachandran offers the view that Antoinette is 'too exotic' for Rochester and the 'frigidly sane English society'. I believe that these are both true and at this time people were not cognizant to other cultures and societies and weren't joint through technology or westernised through migration so had little or no common ground and represented two totally different social backgrounds which could never be amalgamated. The use of pathetic fallacy of the wind and rain and the 'sad leaning coconut palms' makes the reader feel that Rochester's attitude and feelings are justified because the surroundings are depressing but he does give us hope that he will make e and effort after the interminable journey and looks forward to a 'sweet honeymoon'. It could be argued that his cruelty is a reaction to his insecurities and Cosway who manipulates this weakness and reminds him that he is oblivious to Antoinette's past and background and that Jamaica is very different to England. He sows the seeds of doubt ion Rochester and shakes the foundations on which he has based his new life on. His fear that his wife has lied to him leads him to hate her and the place that she loves and the things he used to love like poetry and he now 'hates the music he once loved'. Although some actions or motives can be explained he does sometimes exhibit marked cruelty towards Antoinette. This is seen when he not only has intercourse with the young servant but also wants Antoinette to hear it as she lays in the next room and has not 'one moment of remorse'. ...read more.

It is her experience and knowledge, which lends weight to Antoinette's cause as we realise the truth in it and the reality and hardship due to the resentment on the Islands. It is this feeling of tension and menace that puts Rochester on the edge and makes him uncomfortable and makes us more sympathetic towards him. Contemporary readers will find it hard to be so condemnatory of Rochester as our position has changed and we are far more equal but at the time in which the novel was written, 1966, the Women's liberation Movement was very active as women spoke out about male repression and inequality. At the time the novel would have been graciously received by feminists as it highlighted the issues that they were campaigning for. It would also be appreciated to show the difference of women in different societies. In Britain they felt repressed, yet in Jamaica they are shown to have a freedom of spirit, especially since the freeing of the slaves. It is this that makes Rochester so confused and awkward as women in Britain aren't as liberated or powerful, socially or spiritually. Rochester's struggle to survive in Jamaica is made especially difficult because of his middle class Victorian background and the fact that what he recognises as social convention are non-existent here. He attempts to take control and protect Antoinette from his own madness as he takes her back from England. Rochester's character should be seen as a victim of the actions of his father, (after being 'rejected for being the younger son' as A. J. Harding says) and to the consequences of which are forced upon him and propel him into an unknown country and social system, which makes him harmful to himself. ...read more.