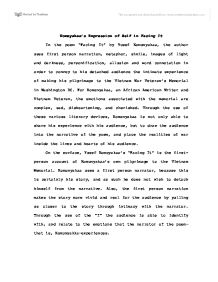 Komuyakaa's Expression of Self in Facing It In the poem "Facing It" by Yusef Komunyakaa, the author uses first person narration, metaphor, simile, images of light and darkness, personification, allusion and word connotation in order to convey to his detached audience the intimate experience of making his pilgrimage to the Vietnam War Veteran's Memorial in Washington DC. For Komunyakaa, an African American Writer and Vietnam Veteran, the emotions associated with the memorial are complex, sad, disheartening, and cherished. Through the use of these various literary devices, Komunyakaa is not only able to share his experience with his audience, but to draw the audience into the narrative of the poem, and place the realities of war inside the lives and hearts of his audience. On the surface, Yusef Komuyakaa's "Facing It" is the first-person account of Komunyakaa's own pilgrimage to the Vietnam Memorial. Komunyakaa uses a first person narrator, because this is certainly his story, and as such he does not wish to detach himself from the narrative. Also, the first person narration makes the story more vivid and real for the audience by pulling us closer to the story through intimacy with the narrator. Through the use of the "I" the audience is able to identify with, and relate to the emotions that the narrator of the poem-that is, Komunyakka-experiences. ...read more.

I'm a window. He's lost his right arm inside the stone. The "white vet" is not a deliberate reference to a soldier's race, though it can be construed as one. Rather, the audience assumes that his audience is familiar with the memorial itself, and as such, is familiar with the white etchings of soldiers into the black stone. The images are ghostly and serve as a haunting backdrop to the thousands of names. Here, a soldier's eyes "look through" the narrators own. The narrator becomes "a window" to the rest of the world, or perhaps the fallen soldier can see through him, and understand the emotions that are extant in his heart. Furthermore, the author personifies inanimate objects in order to give them an element of humanity, and not allow his audience to forget that the names do belong to the thousands of young men who gave their lives for their country for no reason other than that they were asked to do so. The line "My clouded reflection eyes me," places humanity into the rock, which proves to be interesting, because just two lines earlier, the narrator has said "I'm stone," attributing the qualities of stone-rigidity, coldness, and flatness-to himself, and the qualities he possesses-those of humanity, and life-to the stone. ...read more.

We understand that he is "depending on the light to make a difference." That is, that he depends on the light to distinguish the good memories from the bad. For several lines, the poem is inundated with images of light, whether or not they derive a positive connotation. The "booby trap's white flash," the "brushstrokes flash," the "names shimmer on a woman's blouse," the "white vet's image," with "pale eyes" are all images of light which the author uses in order to contrast with the black granite-that is, the cold, unfeeling stone. The poem reverts back to the images of darkness for the end. In the black mirror a woman's trying to erase names: And ends the poem with the same melancholic feeling with which it began. He also reverts back to the mirroring image that he used in the beginning, to reiterate his own feeling of lack for the audience at the end of the poem. "Facing It," by Yusef Komunyakaa proves to be a touching expression of one Vietnam Veteran's experience and emotion as he visits the Vietnam Memorial in Washington DC. However, on a larger scale, it also proves to be a more general expression of the importance of the monument to American citizens who make their own pilgrimage to it. The author achieves this dual triumph through his use of literary and poetic devices as they are presented in the poem. ...read more.