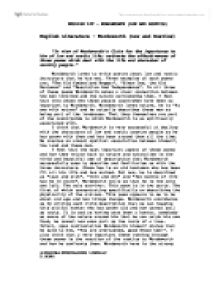 &quot;In view of Wordsworth's Claim for the importance to him of low and rustic life; estimate the effectiveness of those poems which deal with the life and character of country people.&quot;

English Literature - Wordsworth (Low and Rustics) "In view of Wordsworth's Claim for the importance to him of low and rustic life; estimate the effectiveness of those poems which deal with the life and character of country people." Wordsworth loves to write poetry about low and rustic characters that he has met. Three examples of such poems are, "The Old Cumberland Beggar", "Simon Lee, the Old Huntsman" and "Resolution And Independence". In all three of these poems Wordsworth makes a clear connection between the men involved and the nature surrounding them. I feel that this shows why these people countrymen have been so important to Wordsworth. Wordsworth loves nature, he is "At one with nature" and he actually describes these men as being part of the landscape. That they themselves are part of the countryside to which Wordsworth is so spiritually associated with. I think that Wordsworth is very successful at dealing with the characters of low and rustic country people as he has grown with them and has been around them all the time. ...read more.

Grateful to the point of tears. This emotion again relates back to nature and is related to the way water flows from a river. The tone of the poem changes, just as the life of Simon Lee has changed. It gives Wordsworth's direct speech to his audience asking them did they expect a specific ending which to me proves how well Wordsworth has grasped the philosophical sense of the poem. These people are born, the work all their lives and then they die. Wordsworth tells us about how often this would happen by not making a huge deal of fuss about the character and infact stressing the unimportance of what was going to happen anyway - old age. But instead he shifts the importance to the reaction of Simon Lee, so full of gratitude. All three of these characters are in isolation but The Old Cumberland Beggar and the Leech Gatherer are seemingly completely enwrapped by nature. ...read more.

This man is dependant but not a plague or a pain the people who live around him because they keep him and even respect him for he has always been there. The fact that he is distant leads us to believe that he is alone, but I feel that this character is much less alone than the other two. He is surrounded by people that greet him and feed him. Whereas the Leech Gatherer, which has a completely different message, rather than being somewhat political, is busy within his own thoughts and solitary. The Leech Gatherer focuses on the unity of nature surrounding the character. It begins after a storm and the birds are singing, the air is filled with pleasant noise of waters and the birds are answering each other's calls. This character is like a stone. He is also described as being part of the elements. He is "stood alone". It is strange as he is described as "Neither alive nor dead" and so he is just existing. As the poem opens Wordsworth sees rapture and bliss. Full of onomatopoeias adding to the blissful effect. ...read more.