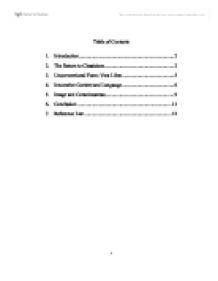 Table of Contents 1. Introduction 2 2. The Return to Classicism 2 3. Unconventional Form: Vers Libre 5 4. Innovative Content and Language 6 5. Image and Consciousness 9 6. Conclusion 11 7. Reference List 12 In What Way Imagist Poetry Influences Modernists 1. Introduction The England-based Georgians had been attacked by the modernists as "unoriginal and slack in technique, shallow in feeling, slight in intellect...and weekend escapism" (David 1976, p.204). The American-based Genteel Mode, on the other hand, was also criticized as "...in its Romantic spiritual elevation it did not grapple with experience..."(David 1976, p.204). Modernist writers contended that the society had undergone enormous changes at the beginning of the twentieth century and that the carefree and relaxed attitude, which was representative of Georgian poetry and the Genteel Mode cannot present the real situation of the society and demanded that people should break away from traditions. Imagists were such a group of poets who refused to obey and challenged the traditions of poetry composition (some of these practices, though, were disapproved by some of the critics). As David put it, "imagism has been described as the grammar school of modern poetry," which means that it plays a fundamental role in influencing the way along which later modernist writers followed to create their work. Reviewing how imagism reacted against history would facilitate understanding of how modernism came into shape. This essay thus is aimed at analyzing certain characteristics of the Imagists poetry and how it is reflected or inherited by later modernist writers: the return to classicism; the break-away from old traditions of poetry form; content and language with modern characteristics; image and consciousness. 2. The Return to Classicism One of the beliefs in respect to modern poetry is that the core of the movement is to return to classicism (Peter 1999, p.68). Although this comment is not adequate in terms of evaluation, it recognizes the reality of the development of modern poetry. ...read more.

The chimneys, rank on rank, Cut the clear sky; The moon With a rag of gauze about her loins Poses among them, an awkward Venus- And here am I looking wantonly at her Over the kitchen sink. With a modern meaning behind, the moon juxtaposing with chimney presents a fresh image towards readers. The moon in Romantic poetry is gentle, soft and romantic. In contrast, the moon here is foul and degraded. What the poet inclined to reveal was that the industrial pollution had damaged the nature and expressed his disgust and contempt towards the pollution, which can be deemed as the modern feature of this poem. Another poet who based his poems mostly on urban life is John Gould Fletcher. The city life under his pen hardly arouses any aesthetic feelings in readers' mind. The following is an extract from "Dawn": Sleep oozes out of stagnant ash-barrels, Sleep drowses over litter in the streets. Sleep nods upon the milkcans by back doors. And, in shut rooms, Behind the lowered window-blinds, Drawn white faces unwittingly flout the day. Ash-barrels, milk cans, window-binds, which are the articles in everyday use in modern society. Glenn explained that the poet glanced at the articles every now and again as they were evidence of the ugly and pain-causing world (1931, p.90). Fletcher did not laud the convenience the above items bring to people but exhibited their dullness and ugliness. The poet was living in a vigorous modern society, enjoying all the advantages of modern life; the city under his portrait was unexpectedly lifeless. What's more, Dawn should be a symbol of vitality, but it also appears to be tedious, boring. It can be assumed that the poet attempted to inform the readers that urban life was unanimated and without aesthetics. Referring back to the "In a Station of the Metro", it can be realized that Pound also chose metro, one of the symbols of modern society, to present the impact of modern civilization on people. ...read more.

Ulysses and Mrs Dalloway are two of such modern novels that explored the sub-consciousness of an individual and there is a transition from the images to the consciousness and eventually the images fuse with the consciousness. From what is stated above, Imagists seemed to be among the pioneering groups who introduced sub-consciousness into literary work. 6. Conclusion To conclude, even though there may be some criticism against Imagists, they are still considered as instrumental in the development of modernist work. Imagists took out the first step in standing against the traditional practices. Imagists can be claimed as the avant garde of the modernism considering that they were exponents of Classicism and that they determined to break free from the conservative forms of poems, which turns out that allusion to mythology and adoption of free verse also appeared in later modernist work. Imagist poetry was advanced in that these poems provided with later poets a vaster theme to explore, modern society and urban life; its conversational, more down-to-earth language enabled itself to be recognized by other modernist writers. The last reason that the Imagist group is seen as one of the progenitors of modern literary movement is that it succeeds in anticipating that sub-consciousness would be inserted into the following modernist work. Imagists were successful in opening up a new ground for following modernist writers to explore. Reference List Brooks, C & Warren, R.P. 2004, Understanding Poetry, 4th edn, Foreign Language Teaching and Research Press, Beijing Childs, P 1999, The Twentieth Century in Poetry: A Critical Survey, Routledge, London, Hughes, G 1931, Imagism and The Imagists: A Study in Modern Poetry, Stanford University Press, New York Jones, P (ed.) 1972, Imagist Poetry, Penguin Books, New York Perkins, D 1976, A History of Modern Poetry: From the 1890s to The High Modernist Mode, The Belknap Press of Harvard University Press, London Travers, M (ed.) 2009, A Dossier of Modern Poetry, The Coop Bookshop, Brisbane 1 All the poems cited in this essay are extracted from Imagist Poetry edited by Peter Jones, 1972. ?? ?? ?? ?? 1 ...read more.