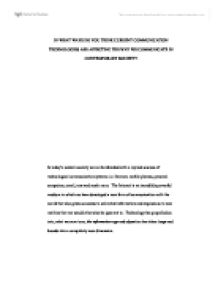 In what ways do you think current communication technologies are affecting the way we communicate in contemporary society?

IN WHAT WAYS DO YOU THINK CURRENT COMMUNICATION TECHNOLOGIES ARE AFFECTING THE WAY WE COMMUNICATE IN CONTEMPORARY SOCIETY?

In today’s western society we are bombarded with a myriad sources of technological communication systems i.e. Internet, mobile phones, personal computers, email, sms and much more.  The Internet is an incredibly powerful medium in which we have developed a new form of communication with the world that also gives us access to unlimited information and exposes us to new realities that we would otherwise be ignorant to.  Technology has propelled us into, what we now term, theinformation age and education has taken leaps and bounds into a completely new dimension.

In a technological age it is evident that we have become co-dependent on such innovative resources and as a result we notice a shift in our communication methods both on a personal and professional level.  In this essay I will endeavour to explore the affects of current communication technologies in contemporary society and how it has effectively created a new culture of communication compared to a not so distant past we refer to as ‘the old days’.

When we refer to the old days we usually associate it with old traditions or more specifically old ways of doing things.  In the past 50 years the world has witnessed an explosion of innovative ideas leading to better, faster and easier ways of conducting our everyday lives.  Keeping in touch has never been easier.  In fact, it’s only getting quicker. We can now send mail electronically which is received instantly by the recipient, we can contact anyone anywhere and at anytime, and we can access unlimited information anywhere in the world.  These days we are able to do everything we need and want from the privacy of our own homes.  With the invention of the Internet we can now conduct a business from home, pay all our bills online and even have our groceries and almost any other imaginable item delivered to our front door.  We have developed faster methods of communication through the use of the Internet and mobile phones leaving us more time to do other things.  It seems technology is propelling us into a world where convenience and time saving has become the dominant factor.  In essence we have evolved into timeconscious beings.

A recent report governed by Australian Bureau of Statistics (ABS) states, ‘The Internet can be used for cultural or recreational pursuits, and can save time (through activities such as Internet banking) which can be spent on other things’ (http://www.abs.gov.au/Ausstats/abs@.nsf/94713ad445ff1425ca25682000192af2/5338D62935241FCDCA256BDC00122420?opendocument).  But what other things are we doing?  According to ABS Australians are spending less time playing, sleeping and eating and spending more time working (http://www.abs.gov.au/ausstats/abs@.nsf/Latestproducts/4153.0Media%20Release12006?opendocument&tabname=Summary&prodno=4153.0&issue=2006&num=&view=).

So are we really saving time or are we just minimizing the time it takes on domestic duties and social responsibilities in order to focus our energies on making money?  Most certainly government offices, major conglomerates and small businesses have increased productivity since this technological boom and no doubt profitability has increased 100-fold yet, ironically, it seems the world is in a hurry.  Technology affords us more time to make more money!  It certainly brings new light to the old (or respectively new) adage 'time is money'.

The way in which we live in our homes is also changing.  Computers systems are prevalent throughout majority households.  With a single touch of a keypad we can activate the home entertainment system to watch our favourite TV show or listen to music while surfing the net, re-heat last night’s dinner, or say hello to an old acquaintance via text message.  Some new homes in America are being built with electronic eye sensors in the walls, which means you can operate, via remote control, audio-visual security systems as well as heating, ventilation and air-conditioning systems from any room in the house (Derus & Berquist 1996).  It is conceivable to think that all electronics within the household will eventually be linked to this electronic eye and operated with a single remote control.  In the not-to-distant future these electronic eyes will come equipped with interactive voice commands greeting us when we awake in the morning and offering a freshly made cup of coffee.  Salesman and service technician at Sound Investments Ltd., Mark Allen says, “I foresee a time when the whole home is computerized, with everything controlled by central processing, even voice commands” (cited in Derus & Bergquist 1996).  As electronics are getting smaller and computer chips more powerful it won’t be long before people will be investing in robots to do our domestic duties, or even more disturbing, replacing the house pet and becoming the new-age man’s best friend.  Battelle, an American research organization forecast that powerful personalized computers responding to voice commands and tailored to individual owners will soon be the norm.  Such technologically advanced ideas hold the promise of making life at least physically easier but to what extent are we willing to go to save time and energy?  And will people be inclined to stay in their homes?  Architecture professor from the University of Wisconsin-Milwaukee, Sherry Ahrentzen, conducted over a hundred interviews with home-based workers throughout America.  She purports, “I don't think that technology is a deterrent to social interaction.  People thought when the phone was invented, you would stay inside.  Then came the TV the same thing.  Yet all of this has really facilitated social interaction”.

Not only is technology changing the way we communicate but also the way we learn.  It is remarkable to witness toddlers operating a DVD player, TV remote control and answering phone calls but with the advent of interactive multimedia services children are being exposed to virtual experiences worldwide.  Robert E. Allen states that the information superhighway, a metaphor for sending advanced information services around the globe at the speed of light, is developing a new breed of road scholars.  ‘Kids freed from the tether of time and space; kids inspired to explore worlds once closed to them; kids eager to travel new roads to find new ways of learning’ (Allen 1995).  Along the information highway signposts direct us toward social networking.  Facebook is one of many online social networking sites and has attracted millions of users.  According to Internet research website, ComScore Media Metrix, the 7.5 million Facebook users average approximately 20 minutes a day posting pictures, reading comments and messaging friends (Bukowski 2006).  People from all walks of life, young and old, are experiencing a cultural revolution.  Cyber forums are gradually replacing traditional methods of socializing and meeting people but is it affecting our interpersonal skills on a face-to-face level?  Facebook users seem to be maintaining connection with their social networks online on a daily basis and may feel that their social responsibilities are being met but critics of online social networking web sites claim that these sites take away from the time people spend interacting with each other in person.  Conversely, supporters of online social networking consider interaction on web sites such as Facebook in the same esteem as face-to-face interaction and sometimes these interactions can enhance real life conversations (Bukowski 2006).  Technology major, Chris Tanzillo says, “If a person is obsessed with Facebook and it's the only way they make new friends, they'll be in for a great shock when they get out into the real world and have to actually talk to people” (cited in Bukowski 2006).

Whether we are consciously aware or not we are all contributing to a new way of life - a new culture driven by modern technology.  It seems we have not only become accustomed to the practicalities and efficiencies of modern technology but we now consider such devices a necessary part of life.  No doubt we appreciate the invention of mobile phones, for example, and I will go as far to say that most of us, who own a mobile, would feel lost without it.  On the whole, our lives seem to revolve around the use of technical communication devices to the extent that we would almost feel unable to function without them.   Technology has given us access to the world’s knowledge, erasing the boundaries that confine education to the traditional classroom, meeting people of different cultures all over the globe at a rate that would be physically impossible and the amazing   We can literally acquire an education, run a business and socialize all from the comfort of our own homes.

Philosopher Ludwig Wittgenstein once noted that if a lion could talk we could not understand him - the lion's experience and point of reference being so unlike our own.  We're in a somewhat similar situation with technology today.  Technology has brought us to the hinge of history.  It's about to deliver on the promise of the information age and, in the process, change our lives in ways more profound than anything since the Industrial Revolution (Allen 1995).

Allen, RE 1995, ‘Multimedia technology changing the way we communicate’, The Journal: Technical Horizons in Education, p. 1.