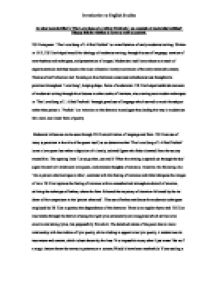 In what ways is Eliots The Love Song of J.Alfred Prufrock, an example of modernist writing? Discuss this in relation to form as well as content.

In what ways is Eliot's 'The Love Song of J.Alfred Prufrock,' an example of modernist writing? Discuss this in relation to form as well as content. TS Eliots poem ' The Love Song of J.Alfred Prufock' is a manifestation of early modernist writing. Written in 1915, TS Eliot helped mould the ideology of modernist writing, through his use of language, creation of new rhythms and techniques, and presentation of images. Modernism itself came about as a result of experimentation and thus become the most influential literary movement of the early twentieth century. Themes of self reflection and focusing on the characters conscious and subconscious thoughts are prevalent throughout 'Love Song', helping shape forms of modernism. TS Eliot helped establish elements of modernist writing through his allusions to other works of literature, also creating new modern techniques in 'The Love Song of J. Alfred Prufrock' through grand use of language which served to mock the subject rather then praise it. 'Prufock' is a variation on the dramatic monologue thus leading the way in modernism for a new, non-linear form of poetry. ...read more.

The reoccurring themes of Prufock's alienation and isolation are imperative to the poem's identification as a hallmark of modernist literature. The poem is set as a monologue and while the opening line refers to 'you and I', which may seem as a reference to the reader, it can be argued that Prufock is referring to different aspects of his own personality; one that urges him to take action, and the other which is refrained and socially awkward. Throughout the poem Prufock's insecurites are revealed. The lines ' And indeed, will there be time/ To wonder, Do I dare? And Do I Dare?/ Time to turn back and descend the stair, With a bald spot in the middle of my hair' highlight the fear and insecurites felt by Prufock, as his fear overcomes him and he turns back instead of going into the party. The fact that he mentions his 'bald spot in the middle of my hair' confirms his insecurities about his appearance and whether it will be the subject of gossip. ...read more.

The epigraph tells us in detail that Guido has been wrapped in a tall flame for his sins, which represents Prufock's own self inflicted punishment, through his inability to communicate and articulate his feelings. The lost soul described in Inferno strikes a chord with the alienated soul of Prufock, who feels that he is 'Scuttling across floors of silent seas'. This feeling of Prufock's debasement to the 'floors of silent seas' resonates with Guido's plight in the depths of hell, which helps the reader realize Prufock is slipping into the abyss of his own personal hell. Fragmentation is one of several modernist techniques employed by TS Eliot to communicate the sense of detachment felt by Prufock in ' The Love Song of J.Alfred Prufock'. Much of the fragmentation in 'Love Song' is achieved by imagery such as Prufock's paranoia that women's eyes have him 'pinned and wriggling onto the wall'. The use of fragmentation enables us to have a clearer insight into Prufock's mind, as his very thoughts are fragmented, as reflected by the lines 'Time to turn back and descend the stair/ With a bald spot in the middle of my hair-/ They will say-How his hair is growing thin!'. ...read more.