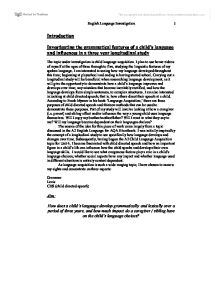 Introduction Investigating the grammatical features of a child's language and influences in a three year longitudinal study The topic under investigation is child language acquisition. I plan to use home videos of myself at the ages of three through to five, studying the linguistic features of my spoken language. I am interested in seeing how my language developed throughout this time; beginning at playschool and ending in having started school. Carrying out a longitudinal study will be beneficial when researching language development, as it will give the opportunity to demonstrate how a child's language improves and develops over time; any mistakes that become inevitably rectified, and how the language develops from simple sentences, to complex structures. I am also interested in looking at child directed speech; that is, how others direct their speech at a child. According to Frank Myszor in his book 'Language Acquisition,' there are three purposes of child directed speech and thirteen methods that can be used to demonstrate these purposes. Part of my study will involve looking at how a caregiver (i.e. parent) and sibling affect and/or influence the way a young child uses language themselves. Will I copy my brother/mother/father? Will I react to what they say to me? Will my language become dependent on their languages choices? The source of the idea for this piece of work came largely from a topic discussed in the A2 English Language for AQA B textbook. I was initially inspired by the concept of a longitudinal study to see specifically how language develops and changes over time. Subsequently, having begun the A2 Child Language Acquisition topic for Unit 6, I became fascinated with child directed speech and how an important figure in a child's life can influence how the child speaks and develops their own language skills. I would like to see what exogenous factors play a role in a child's language choices; whether social aspects have any impact and whether language used in different situations is entirely context dependent. ...read more.

on the grass The grammatical error made here is fairly obvious; I have mixed up the past tense with the present tense and said 'see' instead of 'saw.' This shows that even by this age, I was still prone to making a few grammatical mistakes. However, it is also evident from my transcripts that no effort was made to correct me, which perhaps suggests that as a child grows older, the amount of child directed speech used dwindles. 3. Does a child display confusion on a particular conversational aspect of language at the age of three but fully understand the concept by the time they reach five? ANALYSIS When trying to analyse the findings to fulfil the requirements of this question, it became apparent that there were two specific transcripts that could provide useful. At Christmas 1992, I was three years old and couldn't grasp the concept of showing appreciation for a gift that I didn't actually ask for: 25/12/92 Georgie Oh, just what I didn't want mum Mum Just like you didn't want? Georgie No, I didn't want (undecipherable) look. I didn't even want it did I? Jamie I've got a big present Georgie Look mummy, I didn't even want it Mum Let's have a look Georgie No I didn't even want it I didn't Dad You didn't even want it? Georgie But I like it, I want it Mum (laughs) Georgie I do want it, now Jamie She didn't ask for it did she Mum Is that what she's saying? That's what she's saying At the age of three, a child is still learning the basic foundations to build more complex forms of language. Context is important in this situation - I have received a gift that I had not asked for, and whilst I possessed the knowledge to show that the gift was not something I had previously requested, I was unable to express this thought in accurate language. ...read more.

In terms of the chosen methodology, I believe the idea of creating sub-questions proved useful in the overall findings; however it became apparent during the analysis stage that the questions I posed were perhaps exceedingly ambitious. Some of the questions I proposed to investigate would have taken years of research to come to a conclusion, and therefore my findings could only speculate ideas, rather than reach a definitive overview. However, I do not regret the decision to explore these areas, as I was able to draw assumptions from the data provided, and it was interesting to discover that many of my actions as a child conformed to ideas and theories about language development. In terms of my strengths within the investigation, I believe my analysis section provides some depth into child language acquisition, without being definitive. An asset of mine was managing to maintain a speculative insight in general; as well as looking at the data as a whole, rather than trying to make it fit to my hypothesis or conform to a theory. A weakness that came to light when concluding this investigation links back to the sub-questions I created. I believe that the ambitiousness of them made it difficult to draw valuable conclusions at times, as some of the questions could not be answered from the given data. If I were to perform the investigation again, in terms of future enhancements, I would perhaps alter the sub questions to give a more specific focus, rather than basing them on a very general theory. I would also modify them to suit the requirements of the investigation, i.e. tone down the complexity and ambiguity of them. Another future enhancement would perhaps be to change the coherency of the overall analysis section; it became noticeable that the way I ordered my data was not as chronological as it could have been, and I believe it would have been easier to analyse, should I have made this modification. ?? ?? ?? ?? 1 English Language Investigation ...read more.