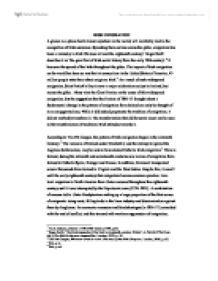 IRISH EMIGRATION A glance in a phone book almost anywhere in the world, will inevitably lead to the recognition of Irish surnames. Spreading them-selves across the globe, emigration has been a mainstay in Irish life since at least the eighteenth century.1 Roger Swift describes it as 'the great fact of Irish social history from the early 19th century'.2 It has seen the spread of the Irish throughout the globe. The impact of Irish emigration on the world has been so vast that at census time in the United States of America, 43 million people state their ethnic origin as Irish.3 As a result of such widespread emigration, Saint Patrick's Day is now a major celebration not just in Ireland, but across the globe. Many view the Great Famine as the cause of this widespread emigration, but the suggestion that the Famine of 1845-51 brought about a fundamental change in the pattern of emigration from Ireland can only be thought of as an exaggerated one. While it did indeed perpetuate the tradition of emigration, it did not markedly transform it. The transformation that did however occur can be seen as the transformation of traditional Irish attitudes towards it. ...read more.

Another factor that emerged which encouraged emigration was the improvement of transport technology. The development of steam powered ships, and better ship design, cut down the length of the journeys that migrants undertook, and made emigration increasingly feasible. The first steam packet linked Belfast with Glasgow in 1818, and it was only a short while longer for ferry services to run from Dublin and cork to Liverpool, the main port for trans-Atlantic crossings. The commercialisation of the transport industry was also to play a role. Competing companies drove down the cost of transport, not only making the trips more affordable, but the possibility of a return trip home more plausible.15 Thus quicker and cheaper transport opportunities were available for emigrants. Furthermore, the 'pull' factors overseas, and 'push' factors in Ireland were inherent even before the famine. The growth of population, the decline of domestic industry, the commercialisation of agriculture, and proto-industrialisation all served as 'push' factors. In particular, the commercialisation of agriculture witnessed the increasing conversion of arable land to pasture, which led to growing dependence on the potato for subsistence; an increased rate of farm consolidation, which added many smallholders and cottiers to the ranks of landless labourers; and the application of new farming techniques, which ...read more.