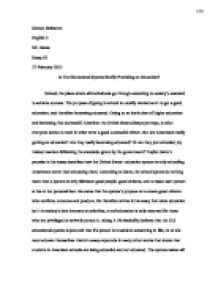 School, the place where all individuals go through according to society’s standard to achieve success. The purpose of going to school is usually viewed as in to get a good education, and therefore becoming educated. Going to an institution of higher education and becoming that successful American the United States always portrays, is what everyone seems to need in order to be a good successful citizen. But are Americans really getting an education? Are they really becoming educated? Or are they just schooled, by trained teachers following the standards given by the government? Taylor Gatto’s premise in his essay describes how the United States’ education system is only schooling Americans rather than educating them. According to Gatto, the school system is nothing more than a system to only fabricate good people, good citizens, and to make each person at his or her personal best. He states that the system’s purpose is to create good citizens who conform, consume and produce. He therefore writes in his essay that since education isn’t in society’s best interests or priorities, a real education is only reserved for those who are privileged or actively pursue it, taking it. He basically declares that the U.S educational system is joke and that if a person is to achieve something in life, he or she must educate themselves. Gatto’s essay expounds in many other works that shows that students in American schools are being schooled and not educated. The system makes all Americans to just want to be average and conform to being a copy of that of a fellow classmate. Americans have concluded that all they care about is grades and thus have developed an obsession for evaluation and that of being of a higher status in society. There is also evidence that proves that kids in the U.S. are not receiving enough time in academics like those of foreign countries and not even high paying teachers at charter schools can make the students test scores high enough.

It is certainly that since its foundations, the educational system has always made students pursue grades and become “grade collectors” to feel good about them, to have a notion that they have accomplished something and therefore they “show off” their grades as a medal to society. Most of the students in the system just want to be average. But it should be all about knowledge and with this the ability to do many things in the world “providing a critical perspective on society, and allowing it to act as though it was living beyond the limiting boundaries of themselves.”(Rose). The school system discourages all parts of being original, and turning to the point where people are told what to do all the time making them slaves to society’s rules. People just want to be average because it works with society, it works with the world around them and it works for them. Today’s world provides people with everything they need to have. They become so irrational that when bored, instead of doing something productive “they buy a television, watch it and buy whatever they see advertise in it.” (Rose). People become consumers and producers and this is the way they are shaped in the school system. To think that they are fine in the position they are, when if educated, they could achieve so much more than being the average Joe.

Part of the success that a student has or not, depends in a big part to the time they spend in school.  The National Education Commission on Time and Learning found that most American students spend so little time studying academic subjects than those of other countries. (Sykes). The commission's two-year study found that American students spent only about 41 percent of the school day on basic academics. Their schedules usually are full with work in self-esteem, personal safety, AIDS education, family life, consumer training, driver's ed, holistic health, and gym, the typical American high school. A regular U.S. student spends only 1,460 hours on subjects like math, science, and history during their four years in high schools. For the meantime Japan spends 3,170 hours on basic subjects, students in France spend 3,280 on academics, and students in Germany spend 3,528 hours studying such subjects, nearly three times the hours dedicated in American schools.

It is astonishing to see the facts of how poorly American schools actually do compared to those of other countries. As always, however, the educational establishment will use such excuses that are simply not acceptable. The data, especially from Taiwan and China, go a long way toward dispelling such interpretations. Large schools, large class size, and old-fashioned school buildings do not necessarily limit children's academic achievement. American teachers also turn out to have higher levels of formal education than those of Asia.” (Sykes).If the U.S. actually starts thinking about it all of this, it’s just embarrassing. How is it possible that students in other countries do better than American students? With bad buildings, bigger student classrooms, and usually rough educated teachers, then the only evident reasons for poorer US results are the teaching methods and materials. “Education is deteriorating in the United States because the principles that it is based upon are wrong, and effectively disrupt the students' learning ability.” (Sykes).“Professionals” try to make it seem hard with this study and that study, this position and that position, and on and on, but this is all to hide the facts; that they are a continuous failure with education and are destroying the capability of upcoming generations to think and deal successfully with life.

Starting with Gatto’s essay and following the other pieces of work from other authors, it is concluded that America’s educational system is actually just made to fabricate “robots” out of Americans by following what society’s standards expect all civilians to do and be. It doesn’t just rob people from their dreams and originality, but it robs all the freedom of doing what individuals please to do and become what they’re meant to be in life. The system makes people to want to be average and to conform to what they have and believe that certain things might be good or bad for them, not letting them be themselves. It also manipulates all individuals to be what society wants making other less fortunate countries, surpass the U.S. in big ways. Those countries seem to have a good educational system, despite the data that Americans usually make excuses for. The U.S. has good materials to achieve having the best system in the world, but the some teachers and the system have corrupted from what it’s actually supposed to be doing, that instead it makes people that have the desire of being educated, to search somewhere else away from public education, and even in other countries that posses a better system as explained. The truth should be brought to the public in a more threading manner that show how Americans are being treated: as experiments from this charter school system affecting kids. It’s supposed to do better but it only shows little improvement in improving schools. Of course, all of this could be wrong along with the authors from the past articles. The educational system works…or does it?

Sykes, Charles J. “Dumbing Down Our Kids: Why America’s Children Feel Good About