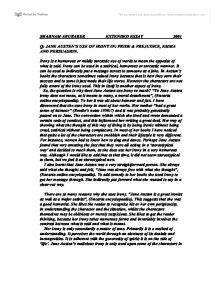 Jane Austen's use of irony in Pride &amp; Prejudice, Emma and Persuasion.

SHABNAM ABUBAKER EXTENDED ESSAY 2001 Q: JANE AUSTEN'S USE OF IRONY IN: PRIDE & PREJUDICE, EMMA AND PERSUASION. Irony is a humorous or mildly sarcastic use of words to mean the opposite of what is said. Irony can be used in a satirical, humorous or sarcastic manner. It can be used to indirectly put a message across to someone as a joke. In Austen's books the characters sometimes valued irony because that is how they earn their success and to some it just made their life worse. However the characters are not fully aware of the irony used. This in itself is another aspect of irony. So, the question is why does Jane Austen use irony so much? "To Jane Austen irony does not mean, as it means to many, a moral detachment", (Encarta online encyclopaedia). To her it was all about humour and fun. I have discovered that she uses irony in most of her works. Her mother "had a great sense of humour" (Brodie's notes 1990:7) and it was probably genetically passed on to Jane. The convention within which she lived and wrote demanded a certain code of conduct, and this influenced her writing a great deal. Her way of showing what she thought of this way of living is by being ironic without being cruel, satirical without being complacent. In most of her books I have noticed that quite a lot of the characters are snobbish and their lifestyle is very different. For instance, women had to know how to sing and dance. Perhaps Jane Austen found that very amusing the fact that they were all acting in a 'stereotypical way' and decided to mock them, as she does use her irony in a very humorous way. Although I would like to add that at that time, it did not seem stereotypical to them, but we feel it as stereotypical now. ...read more.

In 'Pride and Prejudice', Elizabeth's witty irony is shown when she notes that Bingley's sisters were therefore 'in every respect entitled to think well of themselves and meanly of others" (pg 10). Then we look at Mr. And Mrs. Bennet. The two are always sarcastic with each other. In fact I would think that most of their conversations are ironic. When Mr. Bennet says to Mrs. Bennet "you are over scrupulous surely" (pg 52). Mr. Bennet thinks his wife is hyperactive. Their conversations are ironic on a whole because they mainly contradict the first line of the novel "It is a truth universally acknowledged, that a single man in possession of a good fortune, must be in want of a wife" (pg 51). When Jane and Bingley danced all night long, then the whole society in the novel assumed that 'if you were fond of dancing, then it certainly was a step towards falling in love'. Yet there is a truth in the rumor: within the context of that society, dancing was the only way that two people could have a private conversation in public. This now brings me back to Elizabeth's dialogue. She does not get along with Mr. Darcy at first but they end up getting married. The way she speaks ill about Mr. Darcy is very ironic. She describes him to be "a most disagreeable, horrid man, not at all worth pleasing (pg 9). Subsequently when Darcy was told to dance with Elizabeth primarily he was not keen on the proposal and described her as "tolerable...but not handsome enough". The two have more conversations, which lead to irony. For instance when Jane was invited for lunch and the Bingley's, Elizabeth had to go there due to unforeseen circumstances. She has a conversation with Darcy about how women in that society should be. This is when he begins falling in love with Elizabeth, while not acknowledging it. ...read more.

Wickham. A person like Elizabeth actually fell in love with someone, and even when she fell in love with him she was blinded by love. Also the fact that she let her father down, as he had relied on her not to be blinded by love. Jane Austen also illustrates irony through her own narration and her irony regarding society. The magnitude of this is that we get to see what Jane Austen is thinking. We feel her presence and her humor is evident at these points. In 'Pride and Prejudice', at the very beginning of the novel she says, "It is a truth universally acknowledged that a single man in possession of a good fortune, must be in want of a wife" (pg 51). This is something that many mothers of marriageable daughters in the nineteenth century want to believe but it is not a 'truth universally acknowledged', for it would be as near, though no nearer to a universal truth to say 'no single man in possession of a good fortune is in want of a wife'. For such men prefer to enjoy their money unencumbered. In chapter forty-eight, there are ironic comments about the fickleness of society, basically the change of heart over Wickham- whose character is further blackened by the stigma of gambling. Thus, this now brings me to my conclusion of Jane Austen's use of irony in her novels. I think that the way in which she uses irony is very effective, I admire the way that she has a wide range of irony as well as the way she puts her irony forward. It gives a good variation to her novels, and makes them much more interesting. She is a major satirist, and that makes the reader think to an extent. The way she uses irony also brings out her characters much more meticulously. I have to admit though that she can get carried away sometimes. Nevertheless I think she is so used to using irony that she at times did not even notice she was using it. (3653 words) ...read more.