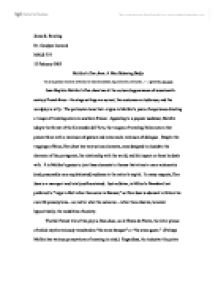 Jean-Baptiste Molire's Don Juan has all the outward appearances of seventeenth-century French farce - the stage settings are surreal, the costumes are ludicrous, and the wordplay is witty.

James S. Bowling Dr. Candyce Leonard MALS 775 12 February 2005 Moli�re's Don Juan: A Man Behaving Badly "He is the greatest rascal the earth has ever held, this madman, dog, devil, Turk, and heretic..." - Sganarelle, Don Juan Jean-Baptiste Moli�re's Don Juan has all the outward appearances of seventeenth-century French farce-the stage settings are surreal, the costumes are ludicrous, and the wordplay is witty. The particulars have their origins in Moli�re's years of experience directing a troupe of traveling actors in southern France. Appealing to a popular audience, Moli�re adopts the format of the Commedia dell'Arte, the troupes of traveling Italian actors that present farce with a maximum of gesture and mime and a minimum of dialogue. Despite the trappings of farce, Don Juan has very serious elements, ones designed to elucidate the character of the protagonist, his relationship with the world, and his impact on those he deals with. It is Moli�re's genius to join these elements to themes that attract a more aristocratic (and presumably more sophisticated) audience in the nation's capital. In many respects, Don Juan is a man apart and totally self-contained. Just as Satan, in Milton's Paradise Lost preferred to "reign in Hell rather than serve in Heaven," so Don Juan is adamant to follow his own life prescriptions-no matter what the outcome-rather than observe, however hypocritically, the modalities of society. ...read more.

His principal ploy is to engage in a "secret" marriage with his chosen target-the nuptials of course being invalid-and then dispose of the woman after losing interest in her and leaving her to her own devices. But, Don Juan's objective appears to go considerably beyond simple sexual gratification. Rather, he has evidently defined success as seduction as the sine qua non of his existence. His tastes are quite catholic and he is willing to expend the same energy to bed a serving girl as a countess. Do�a Elvire, a nun (and presumably a tough nut to crack) is his next intended target. In the Commedia she would be a prominent figure, probably of fun. In Don Juan, she is ultimately an iconic warning, returning in Act IV to "convey to you [Don Juan] a warning from Heaven, and try to bring you back from the precipice toward which you are rushing" (367). Several scenes later, a specter appears as a veiled woman to deliver a last warning. In Moli�re's stage directions, this spirit is played by the same actress who portrays Do�a Elvire. After the spirit says, "Don Juan has but a moment left to take advantage of Heaven's mercy," the protagonist draws his sword and prepares to strike (379). During the course of the play, Do�a Elvire evolves from prospective conquest to messenger of mercy to last warning. ...read more.

Is Don Juan predestined for Hell? Though a particularly difficult, perhaps unanswerable question, some public authorities of that time evidently think so and this perception may contribute to the play being banned after fifteen performances. Signarelle's closing outburst, "My wages! My wages! My wages!" (380), as he watches his master swallowed in the fires of hell, effectively frames Moli�re's characterization of Don Juan. For all of his implied desire to be a gentleman, Sganarelle remains attached to his paycheck, his true concern, while everyone else on earth or heaven is satisfied with the outcome of his master's predicament. But Don Juan remains attached to his pride, understood in the medieval sense of a misplacement of moral hierarchies. For Christian moralists, Satan's fall comes about through the sin of pride. Don Juan's failing is much the same. While the vehicle of such misplacement is that of lust, Don Juan's ultimate objective is confirmation of his self-perception as a superior being to those about him. And it is this failing that the three warnings (from Sganarelle, Do�a Elvire, and the statue) are unable to overcome. Thus, as in the case of Satan, Don Juan's pride has blinded him to reality, understood in a cosmic sense. Under these rubrics, Don Juan is not predestined for damnation. Rather, he is the vehicle of his own destruction. ...read more.